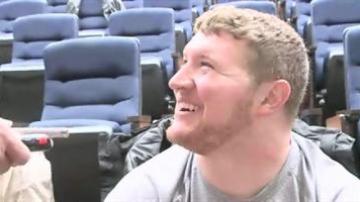 NOTRE DAME, Ind. -- In last week's game against BYU, center Nick Martin suffered a knee injury in the first quarter. This weekend, Matt Hegarty will take Martin's place in the game against Stanford.

The Irish offense had an outstanding game last week against BYU-rushing for a total of 235 yards with 470 yards in total offense despite losing center Nick Martin to a knee injury in the first quarter.

This week the pressure is on against Stanford for the O-line to keep big plays to a minimum and be productive once again in their run game.

When center Nick Martin tore his MCL in his left knee, backup center Matt Hegarty knew what he had to do.

"My first thought was I got to get my hand warm because it was pretty frosty at that time," said Hegarty.

Hegarty left the sidelines and filled the void for the Irish.

"As soon as I realized it was him, that was immediately what I was thinking, was the biggest thing I could bring to the team at that point would be just execute," said Hegarty.

And execute he did. He helped lead the team to a 23-13 victory over BYU.

"He believes in his game, believes in his abilities, he's been through a lot here at Notre Dame and for him to get this opportunity, he came in and did a great job for us and you can tell he's got a really good demeanor heading into this week, knowing it's going to be his first start at center and I'm excited for him," said quarterback Tommy Rees.

A year ago this opportunity would have been impossible for the junior. Hegarty suffered a minor stroke and had to have heart surgery.

He says this Thanksgiving, he has quite a bit to be thankful for.

"At this time last year I had a lot of different things on my mind. It's been a long year but it's amazing kind of how it's come around. I'm just grateful for the opportunity right now," said Hegarty.

Although he has empathy for his injured teammate, Hegarty wants to seize the moment and help wrap up the regular season with a win.

"I feel bad for Nick, he's one of my good friends, but I just want to be able to get in there and try to help out these guys as well as possible," said Hegarty.