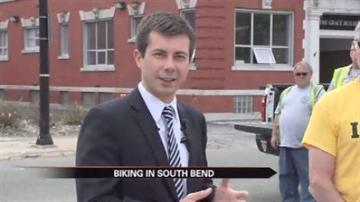 SOUTH BEND — Mayor Pete Buttigieg announced on Tuesday that May is Bike Month, but that's not all. He wants everyone to participate in Bike to Work Week during the third week of May.

Now there are additional sharrows which are the pavement markings that help bicyclists stay in a safe area.

Sharrows will also be added to Colfax Avenue and Twyckenham later this year.