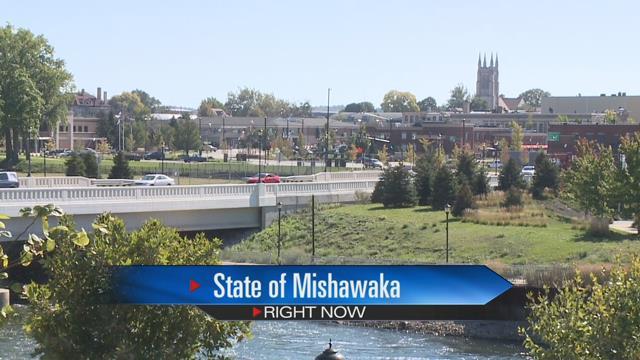 New developments and growing interest in the area is turning Mishawaka into a city on the rise.

“We’re seeing traffic come to Mishawka far beyond the 50,000 residents that we have,” said Mayor Dave Wood.

Monday, Mayor Wood delivered his fifth state of the city address and with several new projects on the horizon; he says 2016 will be the city’s best year.

The theme for this year’s address was “Mishawaka Transformation.”

It’s a nod to the several development projects happening around the city, the mayor believes, is helping build up Mishawaka.

2015 saw one of the most productive years in Mishawaka’s history according to the mayor.

That included modern development near the Riverwalk and along Gumwood road promising upscale commercial and residential properties.

“It’s exciting to see all the wonderful things the city is wanting to do for redevelopment and development in general,” said resident Janet Whitfield-Hyduk.

But Monday during his state of the city address, the mayor announced intentions to top that accomplishment.

“Currently tonight I’m going to talk about a 400,000 sq foot facility right smack dab in the middle of our downtown, mixed used, 230 residents with some shops and retail and commercial,” said Mayor Wood.

That development would include 230 apartments and the first parking garage in the city.

“Really what’s significant about that project is if you added all the projects that we’ve done downtown to date this would double that,” said City Planner Ken Prince.

A lofty and major project the city hopes will turn the area into the next Hoosier hotspot for talent.

“They look like Carmel, they look like Indianapolis so I think it’s wonderful because I do think that we have to want to have young people stay in Mishawaka,” said Whitfield-Hyduk.

That 400,000 sq foot project was a part of the Regional Cities Initiative.

The mayor says they will move forward with the plan despite funding issues from the statehouse.