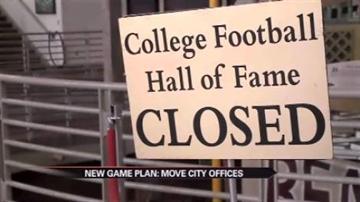 SOUTH BEND, Ind. -- Wednesday Common Council President Derek Dieter said he wants to move city hall to the former College Football Hall of Fame building if the city cannot find anyone else to lease it.

City officials say they want to first try and find a for-profit organization to buy the building.

"Of course all of us would like a for-profit company to purchase this and then start a business here," said Councilman Derek Dieter. "That would be great, to bring employees to South Bend, tax-base to South Bend, that would be our first goal. If that doesn't happen, all we want is the mayor's office and the community investment department to look into possibly moving the city offices here."

Right now the city pays roughly a half a million dollars in rent and utilities a year. By moving, Dieter says it would cut the yearly cost to $100,000.

For nearly three months, the former College Football Hall of Fame building has sat empty, leaving behind a $6.4 million debt in unpaid bonds.

Wednesday, Dieter proposed his solution to move city hall into the building.

"It's a very provocative concept and one that we would be very happy to entertain," said Scott Ford the Executive Director of the Department of Community Investment. "I think it real important to have that conversation with the county and all the stakeholders."

The city's various departments are housed in the county-city building and it has a lease agreement with the county.

Right now, Ford is working hand in hand with the property's brokers to find a new owner.

Although Dieter says this option could cut costs for the city, officials want to see some hard numbers to support that claim.

"Even though we have no plans along these lines, if he thinks it's important, I will certainly take a look at some of the facts that he has gathered and we can have a conversation about it," said South Bend Mayor Pete Buttigieg.

City leaders say this idea has come up before, but many think it would be more beneficial to the city to have a taxpaying, revenue generating business move into the space.

"If we were able to sell the asset and someone was able to buy that debt, that would come off the city's books and would have a knock down effect in a positive way for the taxpayers," said Ford.

The mayor says its a great location with a promising future, which is why he wants to keep an open mind.

"Whatever the future is, it has to balance the outstanding bond payment, the economic benefit and the potential for taxes," said Buttigieg.

We asked other common council members about their thoughts on the proposal and many said although it was a good idea, they would rather see someone in the building that would generate tax revenue for the city.