McCain on his cancer prognosis: It's 'very, very serious' 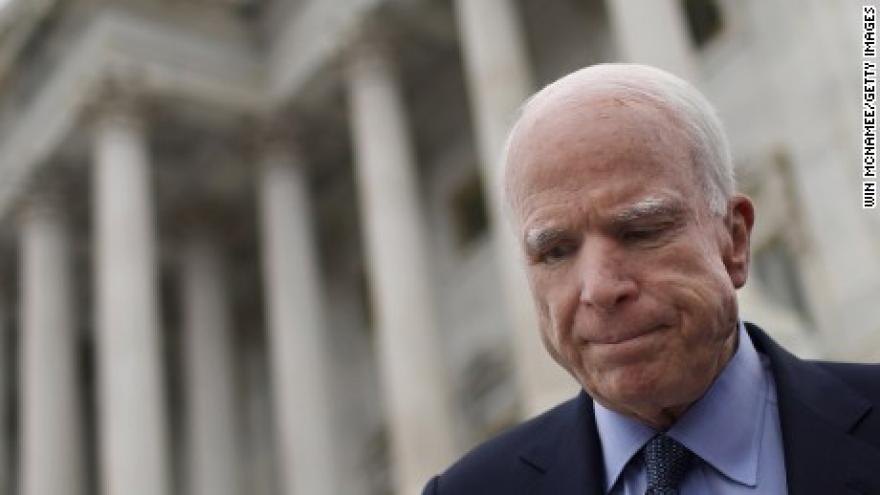 "So I just said, 'I understand. Now we're going to do what we can, get the best doctors we can find and do the best we can. And at the same time, celebrate with gratitude a life well-lived,'" he said on CBS's "60 Minutes."

He recalled how he went back to Washington, against his doctors' requests because it was only 11 days after his brain surgery, to vote on health care.

"I got very choked up," McCain said, recalling the standing ovation he got on the Senate floor. "And then, of course, you know, all of them coming over and giving me a hug. It was deeply moving, I had never seen anything like that."

During the interview, McCain was asked whether his "no" vote on the Senate's health care bill over the summer was to get back at President Donald Trump for saying he wasn't a war hero during the campaign.

"If I took offense at everybody who has said something about me, or disparaged me or something like that -- life is too short," McCain responded. "You've got to move on. And on an issue of this importance to the nation, for me to worry about a personal relationship, then I'm not doing my job."

And on Trump, McCain refused to say whether he believed he was unfit to be President, instead saying that he trusts the American people for voting for him.

"First of all, I believe in our system. The American people selected Donald Trump to be President of the United States. We have to respect that," McCain said. "Second of all, he has a very strong national security team around him who I know has significant influence over him."

When asked whether Trump ever apologized for saying he wasn't a war hero, McCain said no. He also emphasized he and Trump are from different backgrounds.

"I'd be glad to converse with him. But I also understand that we're very different people. Different upbringing. Different life experiences," McCain said. "He is in the business of making money and he has been successful both in television as well as Miss America and others. I was raised in a military family. I was raised in the concept and belief that duty, honor, country is the lodestar for the behavior that we have to exhibit every single day."