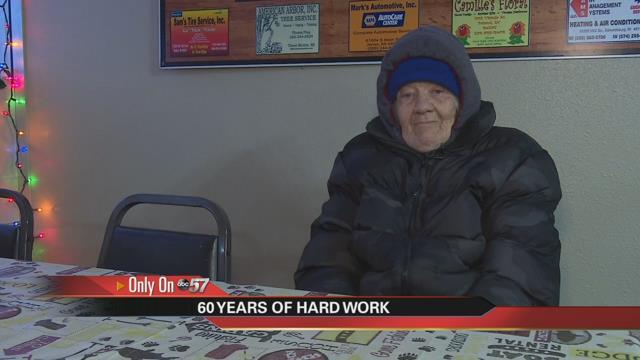 For the last 60 years, Verdella Charles has delivered newspapers in her hometown of Cassopolis.

So a few months ago, Larkin – a lifelong Cassopolis resident and longtime teacher – got a plaque made for Charles to recognize her decades of service to the community.

In October, a picture of Charles accepting her plaque surfaced on a Cassopolis, Michigan Facebook page, and the trigger for this story was born.

On the morning of December 9, 2016, ABC57’s Taylor Popielarz met up with Charles and Larkin at 6 a.m., just as Charles was beginning her daily paper route.

In the midst of the first significant snowfall of the season, Charles led the way; doing her job just as she has since May 14, 1956.

“I don’t know what this town would be like without her,” Carolyn Kelly, Charles’s next door neighbor, said. “We’ve lost a lot of people [in Cassopolis], but Verdella? That would be a big hole in this community.”

Charles said receiving the plaque from Larkin was unexpected.

“I was surprised,” she said. “Cause I didn’t think anybody cared about me.”

The video above is the culmination of that morning spent with Verdella Charles, Cassopolis, Michigan’s 77-year-old newspaper carrier.