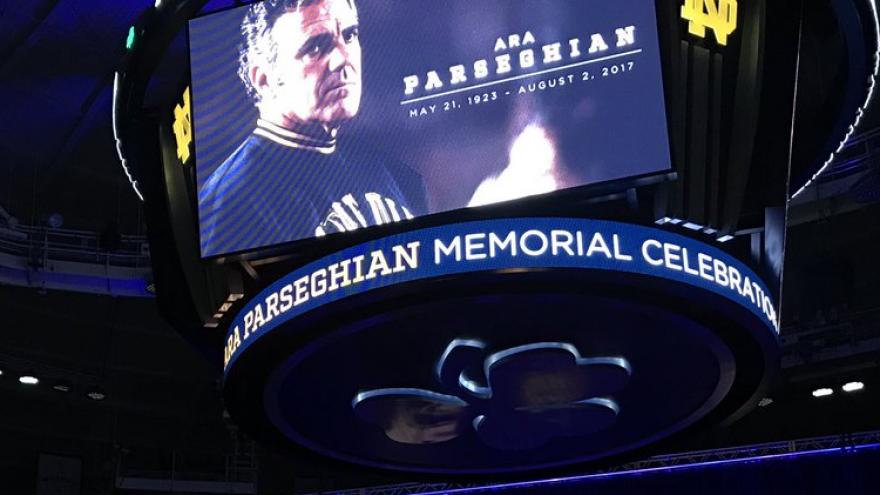 The crowd of around 2,000 people stood and cheered to the Notre Dame victory march in honor of their favorite football coach, who took the team to two national championships.

Notre Dame alumna and NBC News correspondent Anne Thompson was the emcee. Speakers included president of Miami Ohio University, Greg Crawford, who was formerly the dean of the College of Science at Notre Dame.

Former Notre Dame Basketball coach Digger Phelps was emotional as he spoke about Parseghian’s loyalty to his wife and children.

Many also remembered him as a loving family man.

“Just saying the name ‘Ara Parseghian' is a joy and brings a lot of love to my heart. I’m just so happy to be a part of his family. The whole family is always going to be a great part of my life,” says former ND football player Ross Browner.

“He had a bigger impact on me than even my own father and I feel that no one will miss him more than I do. He changed my life,” says Schivarelli.

In the world of college football, Perseghian was cherished by players for his efforts off the field.

“The experiences and the lessons in the way he coached helped us later on. Coach Parseghian was just an amazing man. He was the epitome of everything you would expect and hope for as a second dad,” says Darryll Dewan, former ND football player.

Persevering through personal tragedy, Parseghian dedicated much of his post-football life to the fight against Neimann-Pick disease.

Crawford shared that Parseghian once told him he hopes his greatest achievement is still ahead of him, referring to his foundation one day helping to find a cure.

To get involved with the Ara Parseghian Medical Research Foundation, click here.

You can view thoughts and stories from the Notre Dame family on coach Ara Parseghian as well as Jack Nolan's full interview with Brian Kelly, just click here.