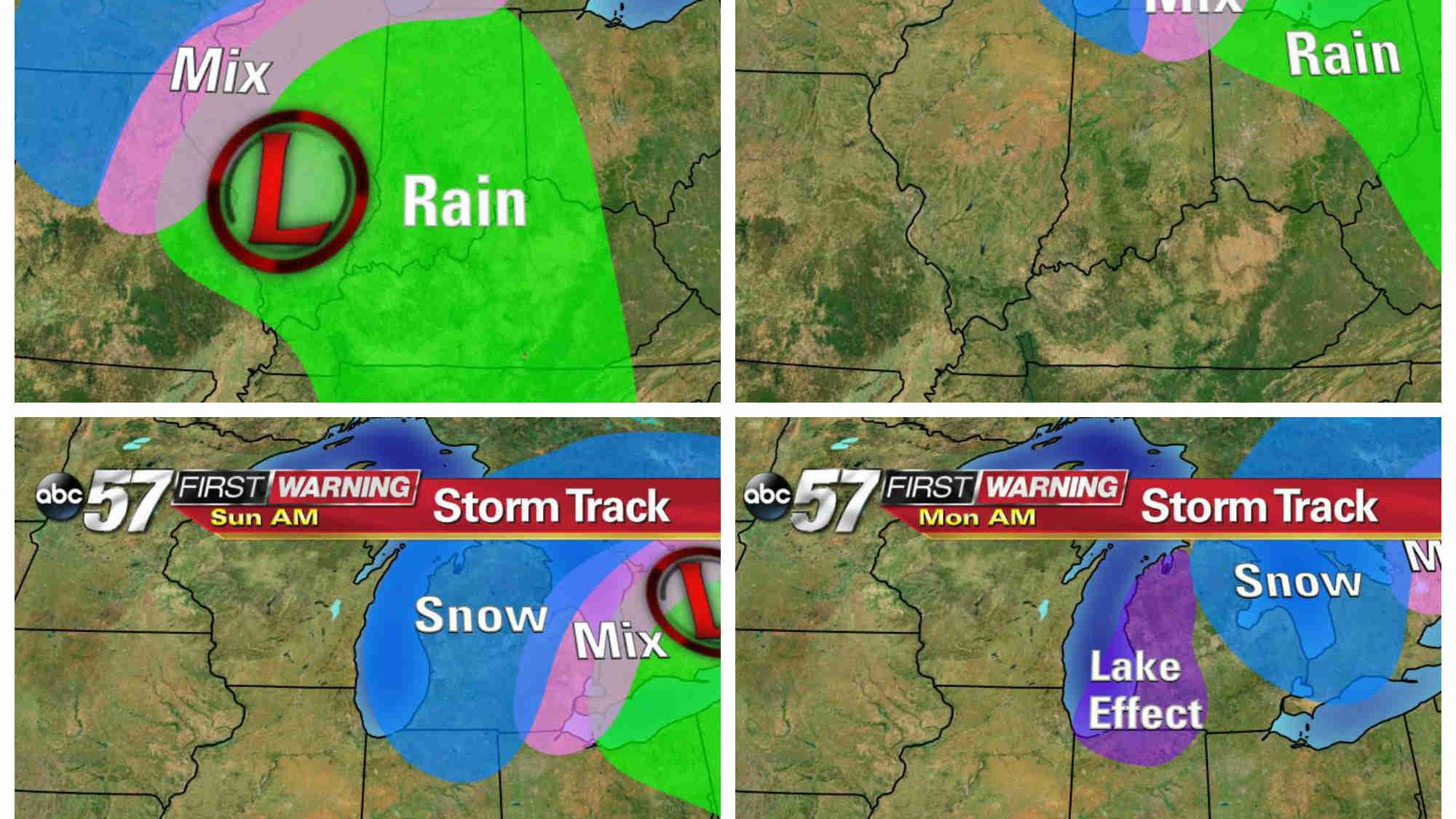 Update January 3rd: Next focus will be the transition to snow Sunday. Saturday night looks to be mostly rain to mix with little impact. Sunday as temperatures drop in the morning sleet will change to snow. Expect 1"-2" of snow Sunday with an additional 1"-2" Sunday night into Monday as arctic air surges into Michiana. Higher amounts of 2"-4" per round near the lake and 1" per round to the far southeast.

Update January 2nd: Greatest concern is a mix of snow, sleet and freezing rain early Saturday. Drivers should use caution before 11 AM. A Winter Weather Advisory has been issued due to the possibility of slick roads. Icy roads are not expected to last as temperatures rise into the mid to upper 30s Saturday and the precipitation changes to all rain.

Saturday night expect mostly rain changing to a rain / snow mix early Sunday. Sunday there will be bands of snow, but at this time only 1"-2" at most are expected.

Next week and arctic blast hits bringing lake effect snow. Tuesday will be the highlighted day with the greatest potential for snowfall with a clipper system. Stay Tuned!

Update January 1st: As stated in the initial forecast, this storm system is looking very similar to the Christmas Eve storm system. The system is taking a more westerly track, this means more rain than snow. The greatest hazard could be the possibility freezing rain before 10:00 AM, after that temperatures rise above freezing.

Expect rain  most of Saturday, then a slow transition to sleet / snow Saturday night. Sunday we could see some snow showers, but right now accumulation is looking minor, with scattered snow showers.

Sunday night a blast of arctic air will turn on the lake effect snow machine and drop temperatures into the teens and single digits. The greatest potential for significant accumulation is Tuesday with an Alberta clipper. Depending on how things play out, you may need to get the shovel out.

To see how cold next week is looking, watch the latest First Warning Weather Forecast.

Update December 31st: No major change at this time, but the key hazard to focus on may be freezing rain Saturday morning before temperatures rise above freezing. The overall track of this storm hasn't change significantly, though the change to all snow looks likely Saturday night. This would bring some accumulation into Sunday. A clipper system next Tuesday may bring the better chance for heavier snow, with lake effect/enhanced.

ABC-57 News -- It's almost New Year's Eve, ending the month of December with less than a half inch of snow. This could all change by this coming weekend as a  storm system brings our first real chance for snow in over a month.

Models are just now picking up on this system and it's not just the fine details that are in question. This is a similar set-up to our Christmas Eve storm system, where the track of this storm could decide how much rain, mix or snow we receive.

As of Tuesday evening, the latest model runs have the system quickly slicing across Indiana from around Evansville towards Angola. This puts Michiana right on the dividing line, meaning we'll likely see rain, mix and then snow.

Models have the storm system cutting up from the southeast Saturday morning bringing mix and then rain to Michiana as temps rise above freezing ( Fig 1). Saturday night the system is centered towards Toledo Ohio and rain will change back towards mix and then snow ( Fig 2). Sunday morning the system moves into Canada and eastern Great Lakes this keeps us in an area that could see wrap-around and lake enhanced snow bands ( Fig 3). Ending Sunday and heading into Monday expect colder temperatures ( Teens and 20's) this will likely turn on the Lake Effect Snow ( Fig 4).

The focus will be how far east or west the track of the storm takes. Generally speaking, the farther east the storm track is the more likely we'll see snow, the farther west it is, the better the chance for rain and mix.

In the wake of this storm system, next week there's enough cold air that lake effect snow could continue through Wednesday ( Jan 7th), as models are hinting at a secondary waves.

At this time the message is the same as the Christmas Eve storm, " Stay Tuned". Short range models will begin to pick up this system in the next 24-28 hours. Stay with the First Warning Neighborhood Weather Team as we track this next around of winter weather.