Two rounds of storms moved through Michiana - the first round Sunday evening, and the second in the early hours of Monday morning. Many woke up to find tree and powerline damage. This was my experience tracking the aftermath of the storm.

I was up earlier than usual (my alarm clock went off at 12:30 a.m.). The entire First Warning Neighborhood Weather team was in the studio as a line of storms passed around 2 a.m. Once the line passed, I was off to examine the damage of what we'd just witnessed on radar.

Initially, I was driving along State Road 23 from the ABC57 station in South Bend, all the way through North Liberty.

While there were many downed branches on the drive, I noticed an increase in the number of branches in the road between North Liberty and Walkerton. 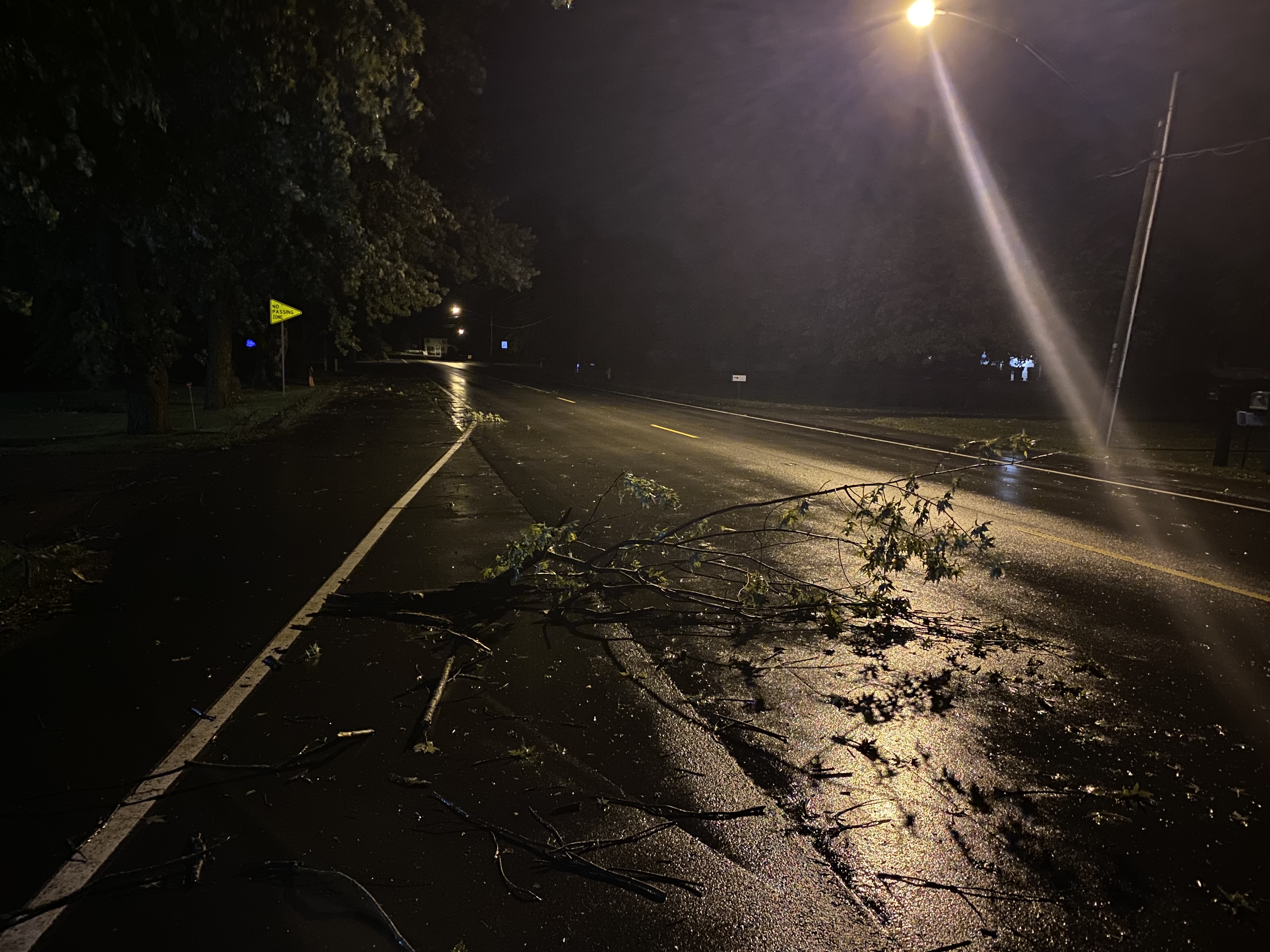 One of the smaller branches I found around 4:30 a.m. off of SR 23 outside of North Liberty

I also noticed a group of workers cutting tree branches down from around power lines in this area, which led to a one-lane road closure off of SR23. Even though they were awake early this morning, they still had a long day of work ahead of them.

On SR23 just north of North Liberty- lots of trees limbs down in the road and crews here are working to cut down branches from a power line. Video 4:25 AM @ABC57Newspic.twitter.com/a0fN63ZISy

With the daylight, I was able to see even more of the trees and branches that were down in the road and in yards. 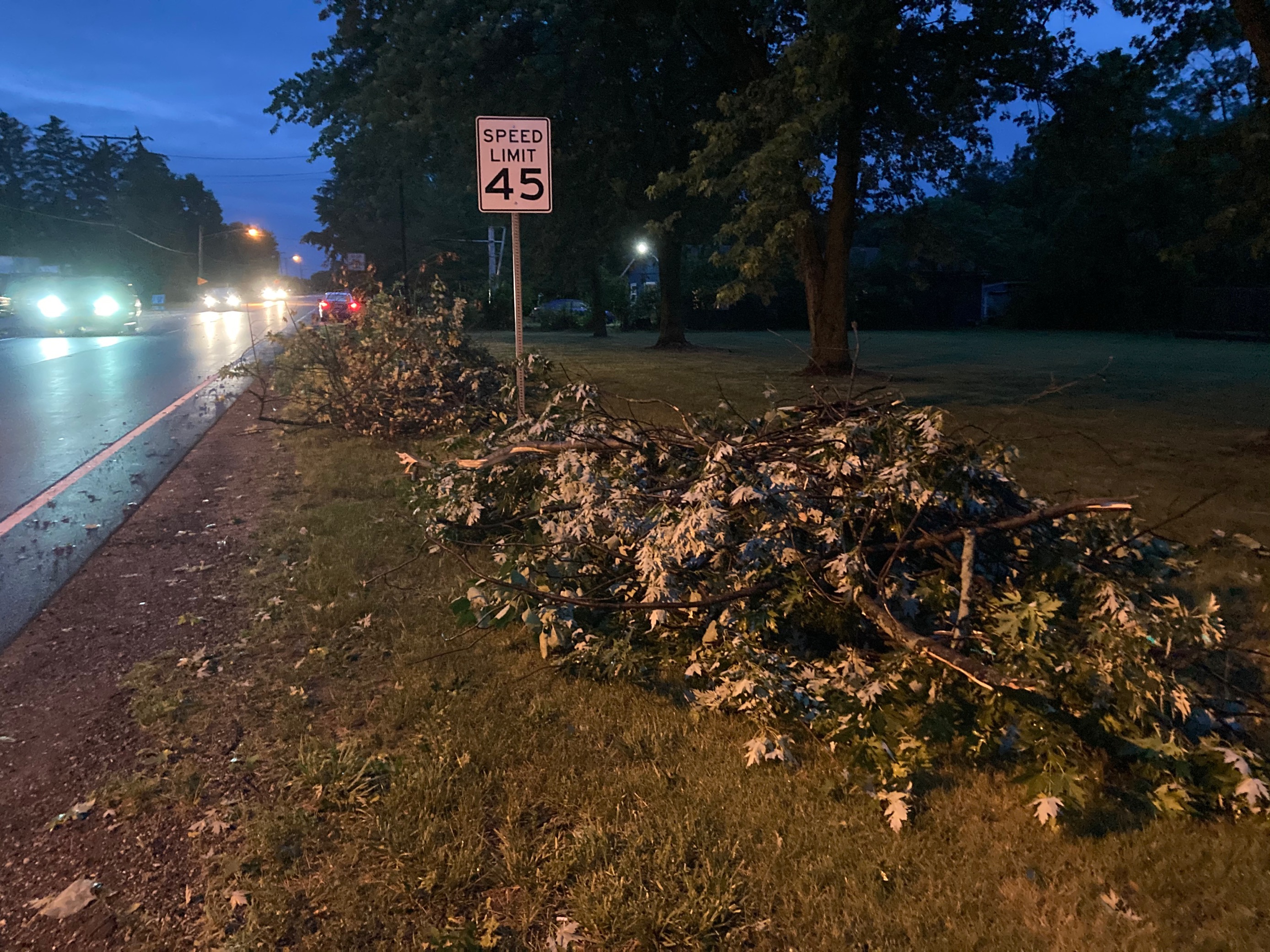 Piles of branches on the side of SR 23 - not sure who was the nice one to drag the branches out of the road so people could drive.

I got a tip that I might want to visit a home along IN-4, close to Potato Creek State Park in North Liberty. This entire stretch of road had several fallen trees due to wind from the storms.

This particular house did not have good luck - a tree close to the home was struck by lightning around 2 a.m. The homeowner said everyone was safe, and that a crew was coming to start the cleanup process later today. 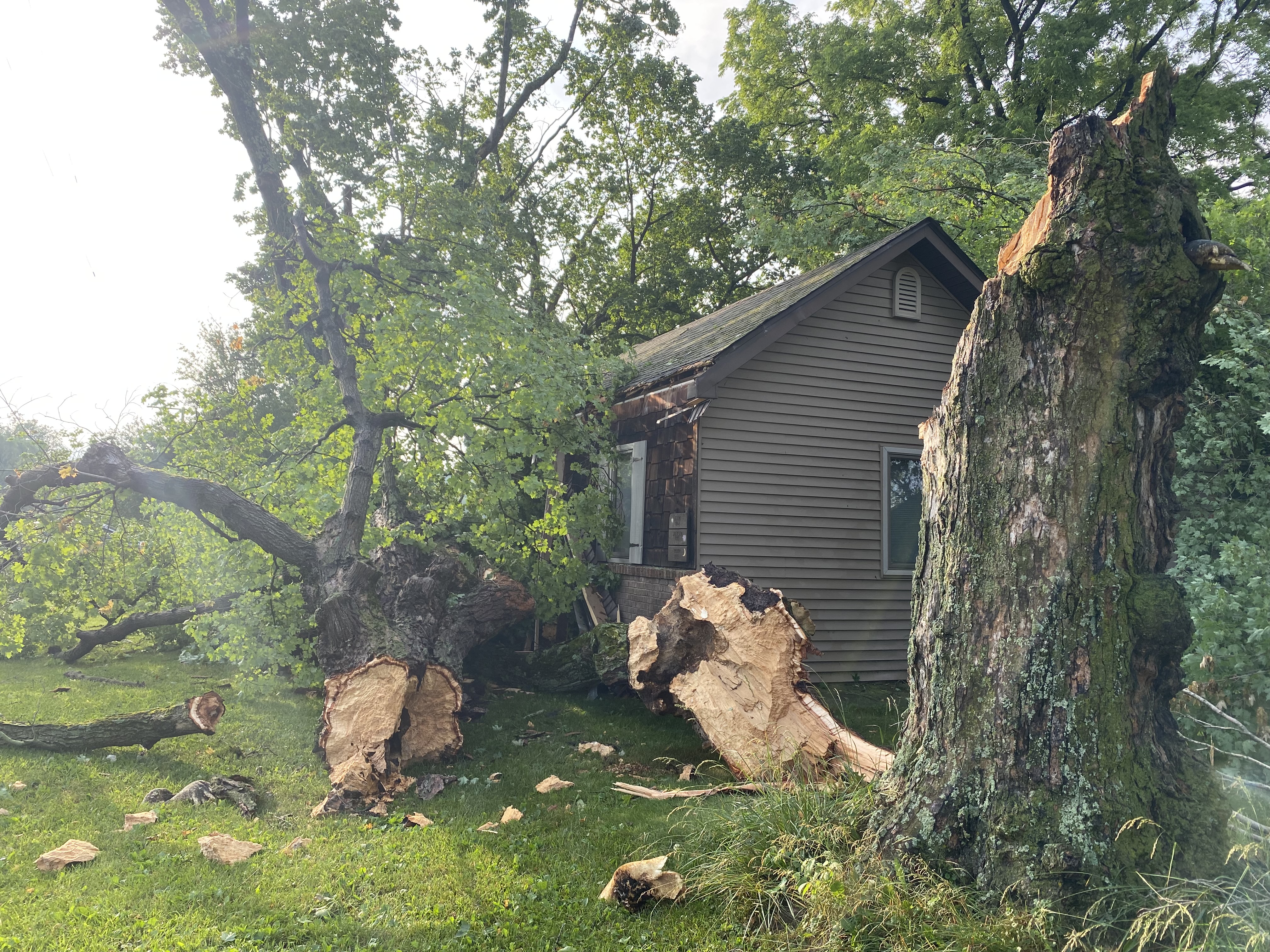 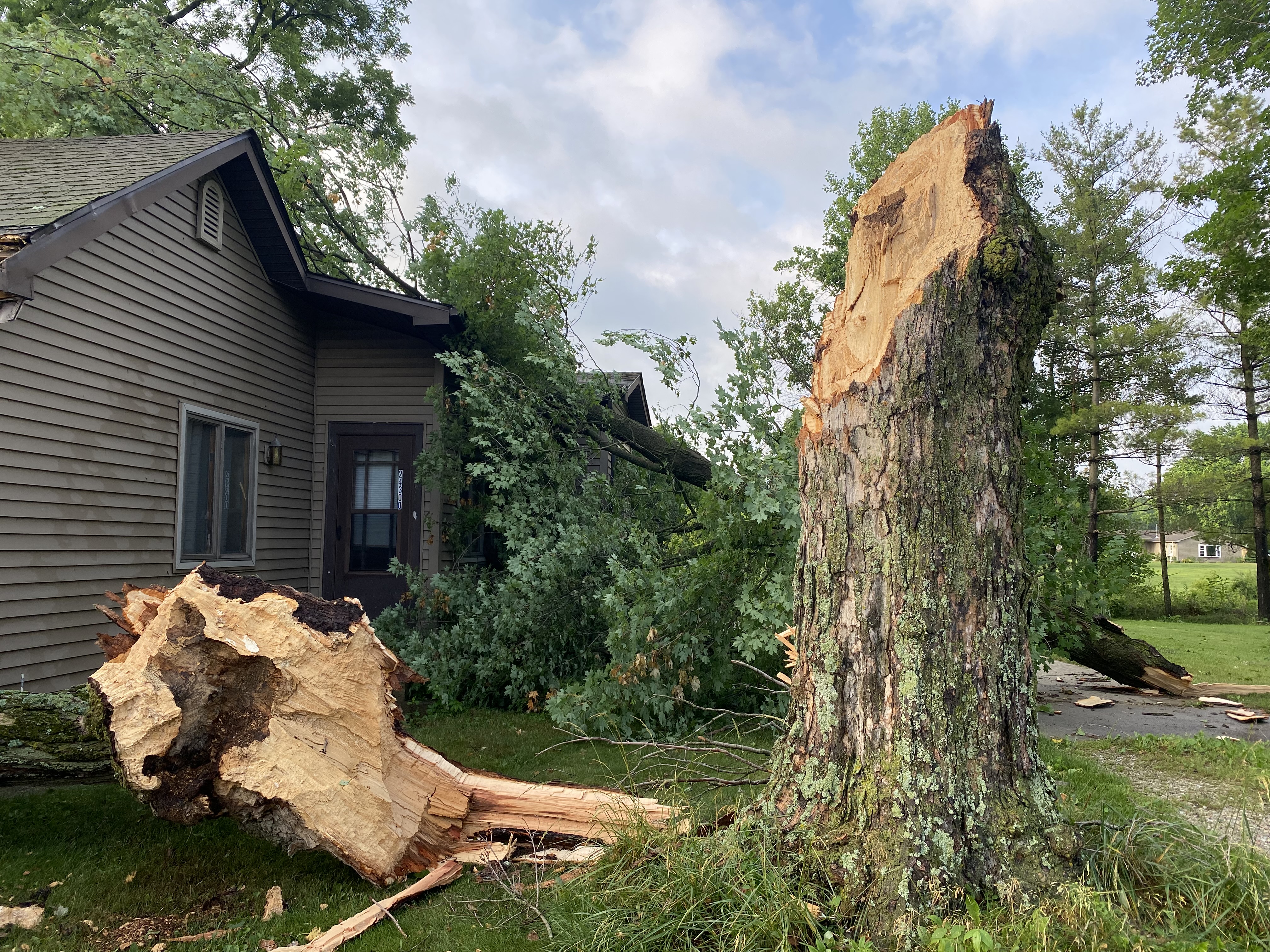 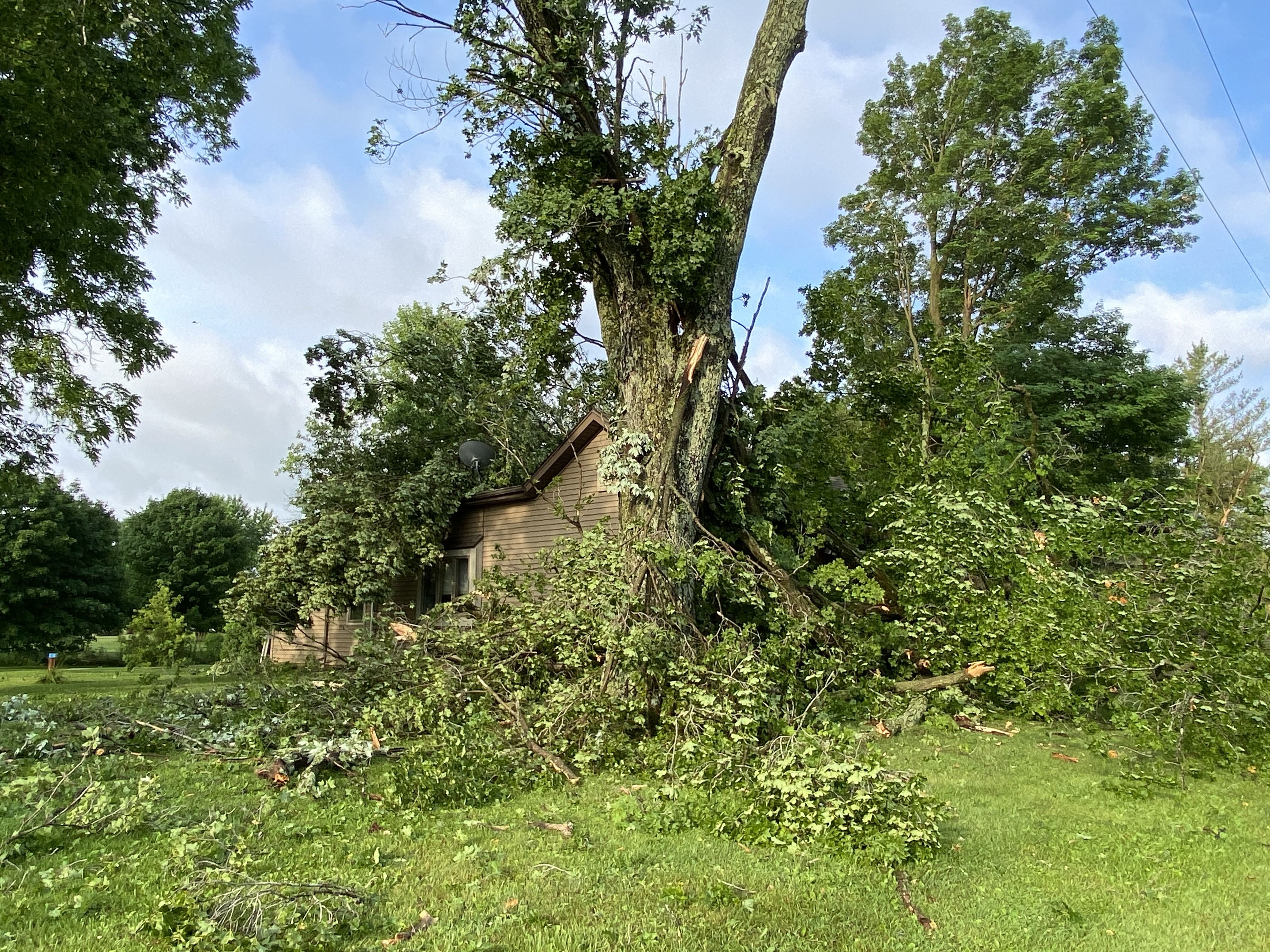 From this house, I decided to trek to Bremen. This proved to be a bit of a challenge due to closed roads.

I needed to get to US-6 in Walkerton. When I was on Tamarack Road, I found it was blocked by a group of trees. 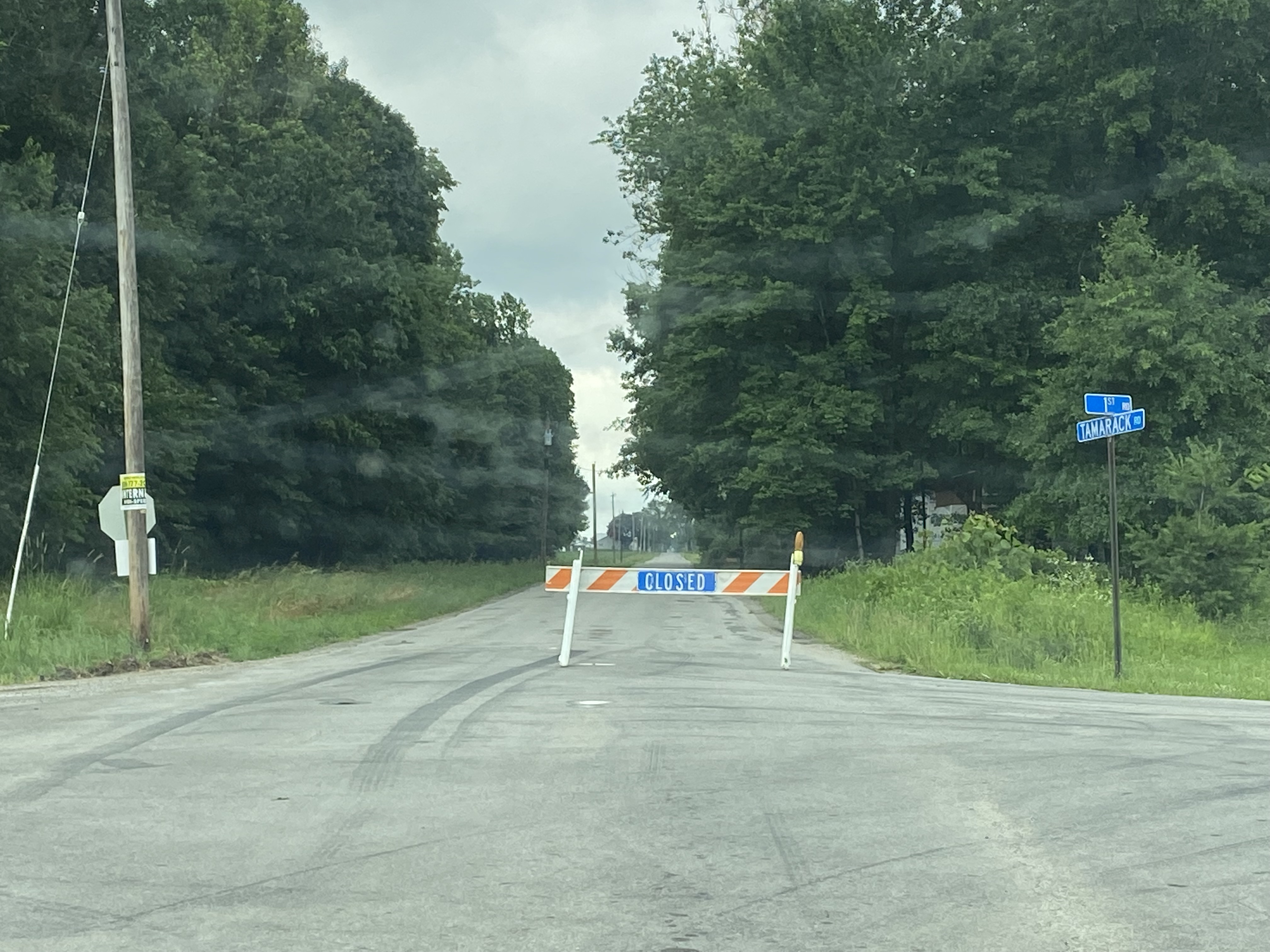 The 'closed' sign was on the road, but of course I still tried to give it a go 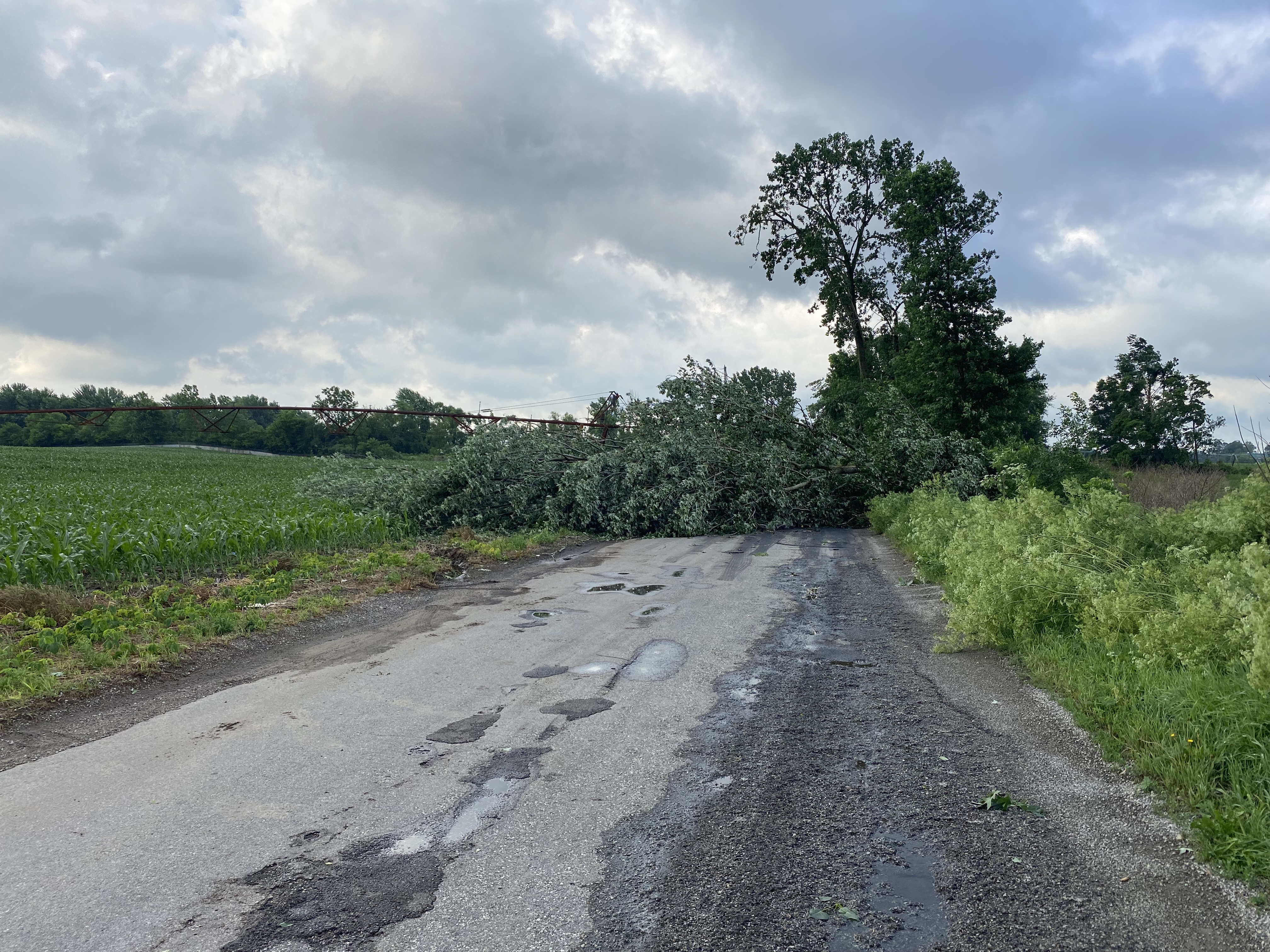 Tamarack Road in Walkerton - definitely closed. I turned around when I got here.

I turned around and went down Sycamore instead, only to find it was also blocked by a tree and had power lines snapped in half. 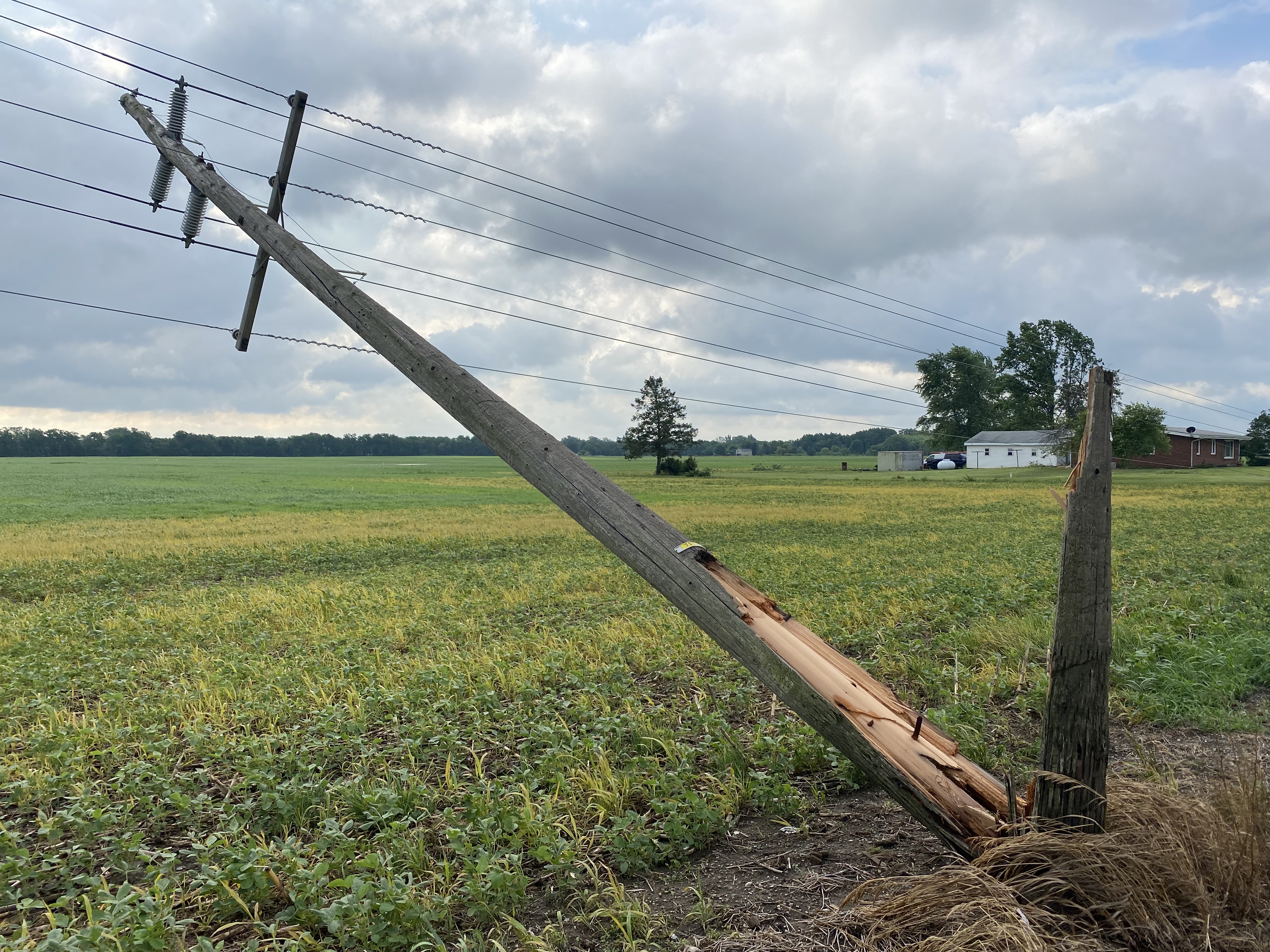 Power line on Sycamore snapped like a toothpick from the wind.

The third road was the charm, and I made it to US-6, then safely to Bremen. Unfortunately, there was even more damage in this area.

Particularly, I stopped at the intersection of Marshall and Dewey Roads. A big, healthy tree had been uprooted in the middle of the neighborhood. 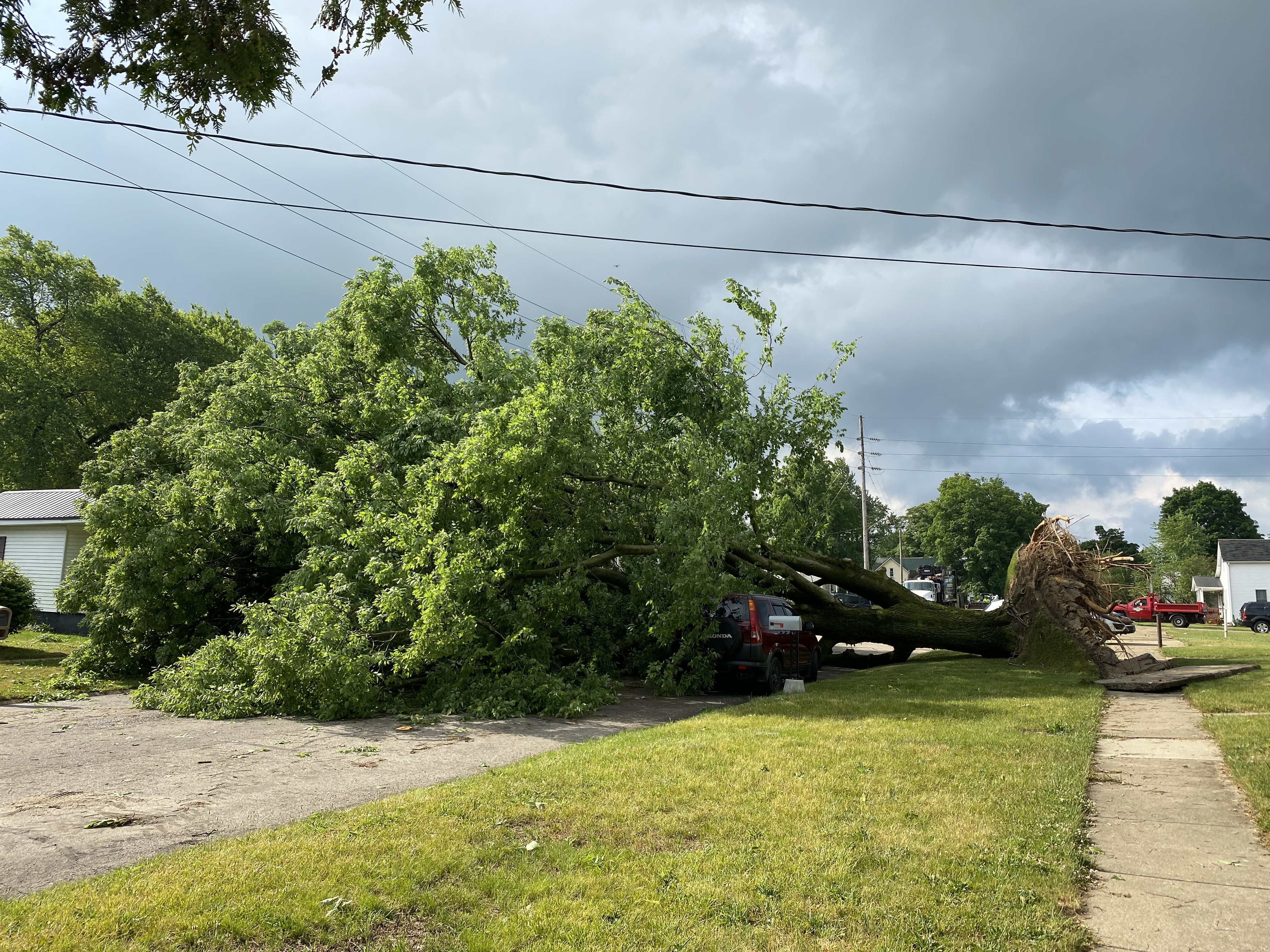 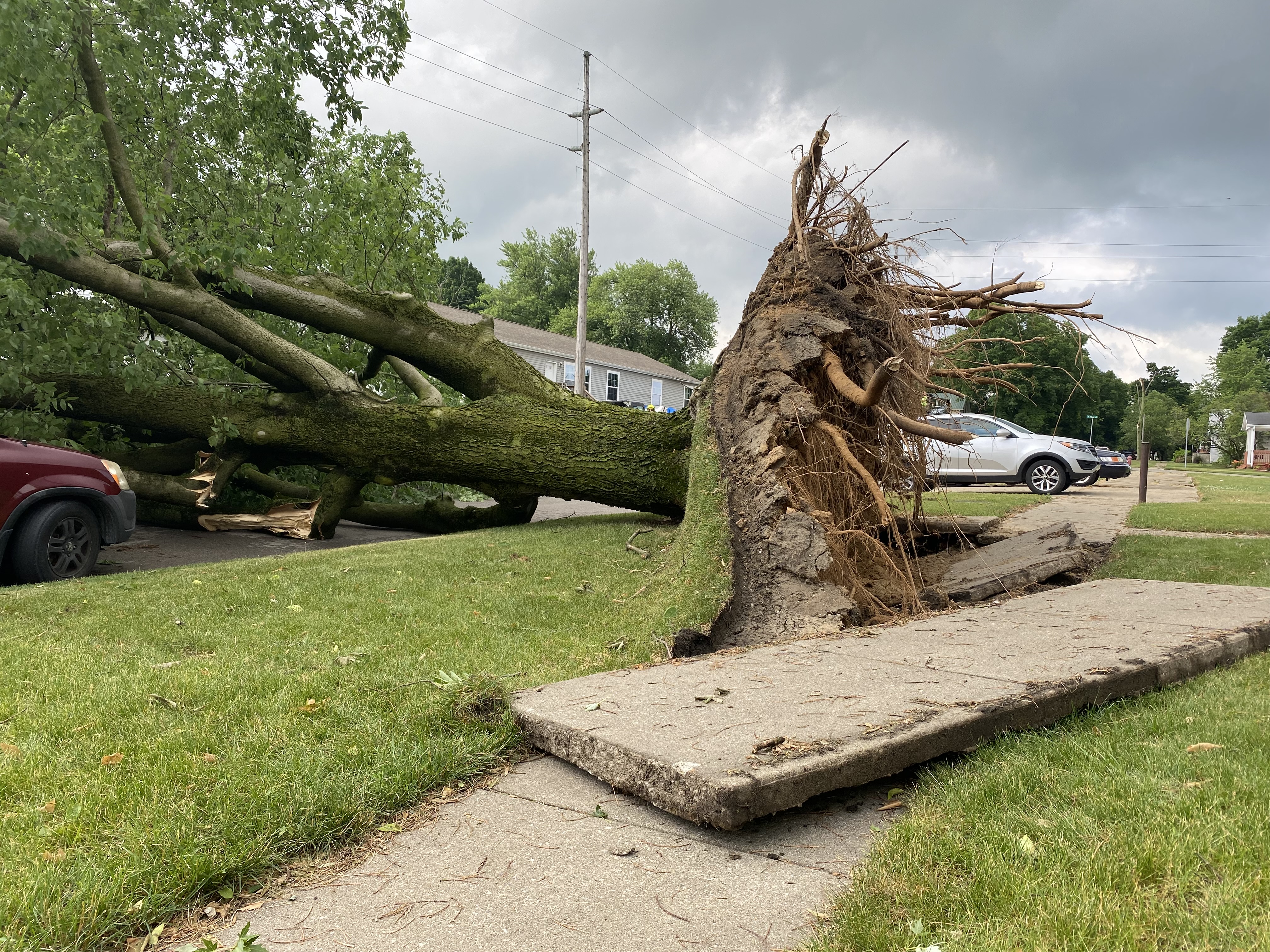 The tree crew was arriving on scene the same time that I was, around 9:30 a.m. They said initially two cars had been under the tree, but when I was there, only the red SUV was left under the tree. 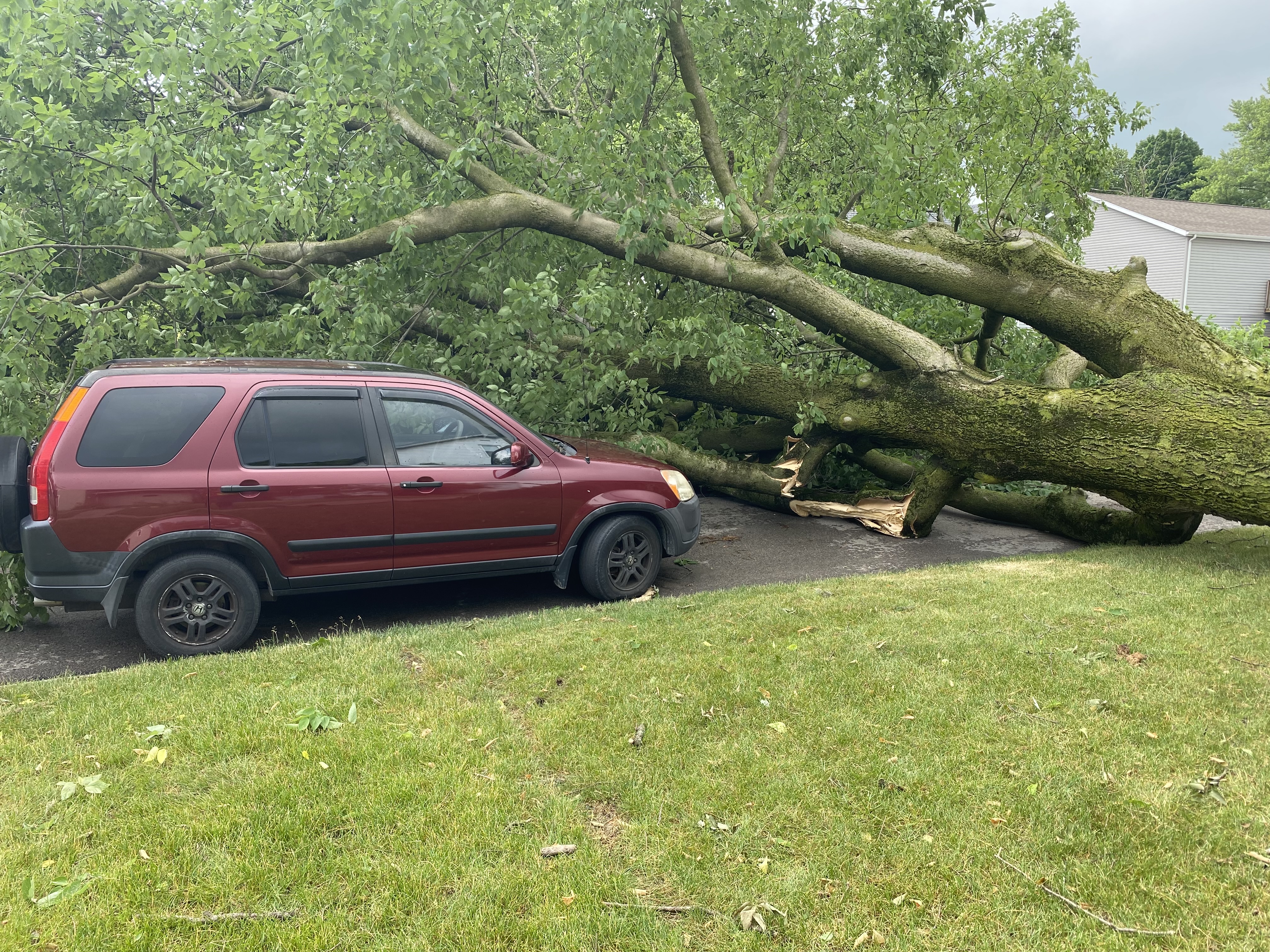 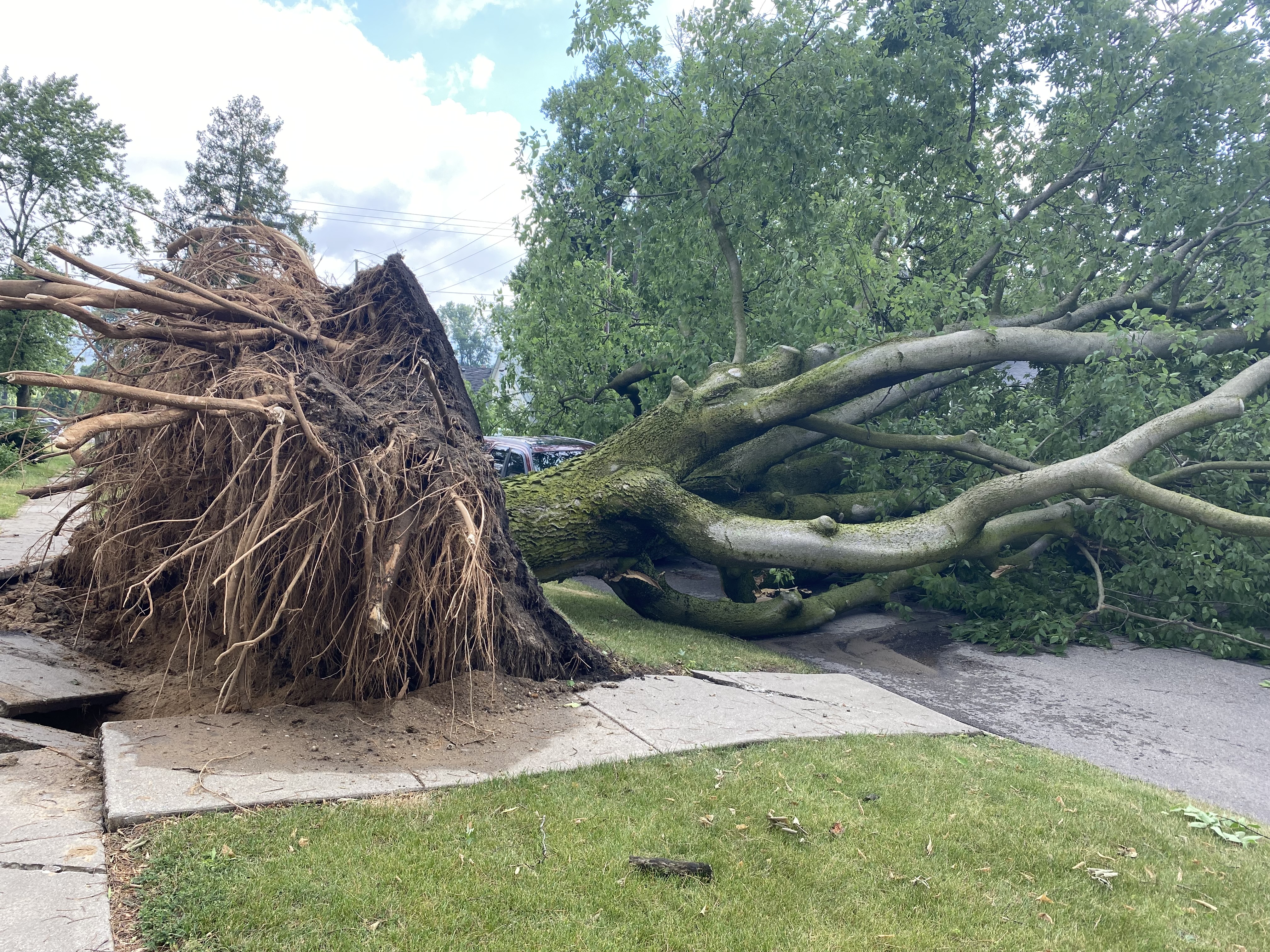 From here, it was back to the ABC57 station. I took Bremen Highway - and there was no shortage of damage in this area either.

For those who are rebuilding or clearing damage, the forecast will stay cooler today and tomorrow and mostly dry this week. This week really is the calm after the storm.