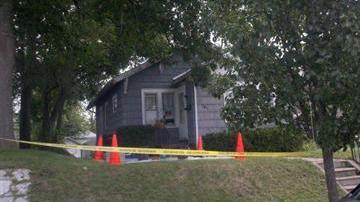 A  South Bend police officer is in the hospital and another is recovering after getting a face full of fumes from a meth lab.

Police were called to the 700 hundred block of 34th Street in South Bend early this morning for a suspicious vehicle.

Once there, police found an unmarked blue duffel bag. When the two officers opened the bag to further investigate, they found a small mobile meth lab.

“This is a nice neighborhood. The house down there has been a rental and we knew when they moved in and started putting up ‘No Trespassing’ signs, that was a little different.”

After finding a mobile meth lab on the property, police entered the home. Inside, they found five people and a house full of fumes.


“There were some chemicals that were used in the manufacturing of meth amphetamine and there was also a level of meth amphetamine vapor that was strong enough to warrant calling the fire department to ventilate the residence,” explained Captain Phil Trent from the South Bend Police Department.

Two of the people from the home were released. Two more were taken to the police station for interviews. And one person was held on scene for several hours while the special operations unit waited for a warrant to search the rest of the house.

“Our officers locally have been trained in taking care of the cleanup and the securing of evidence in meth amphetamine labs so we no longer have to rely on outside jurisdiction, we can do it right here inside St. Joseph County,” said Trent.

After securing the warrant, police arrested the man who was held on scene and the special operations unit began collecting chemicals and evidence. For McCahill and her neighbors, the bust means a safer neighborhood.

The two police officers drove themselves to the hospital as a precautionary measure. Both officers were expected to be released from the hospital around 3 p.m. on Wednesday. But, one officer was admitted for observation.