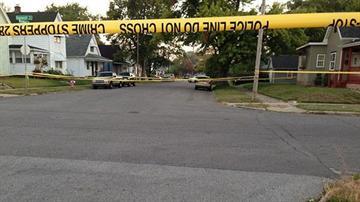 SOUTH BEND, Ind. — South Bend police are investigating a fatal shooting on the city's northwest side.

Officers say two men were shot inside a house near the intersection of Brookfield Street and Fassnacht Avenue around 5 a.m.

Kimia Smith lives just down the street from where the shooting happened.

Police arrived to the home around 5 a.m. They believe there was a brief struggle before the shooting.
One man was shot and killed.

The other man, who was injured, ran out of the home.

"We believe the one victim ran over here to Fassnacht and collapsed," said Lieutenant Dave Wells of the Metro Homicide Unit.

He was taken to the hospital.

Wells says no one is in custody.

They’re asking anyone with information to come forward.

Police have identified both victims, but their identities have not been released publicly.

Police do not believe the shooting is gang related.