Mexican president: 'Of course' we won't pay for Trump's wall 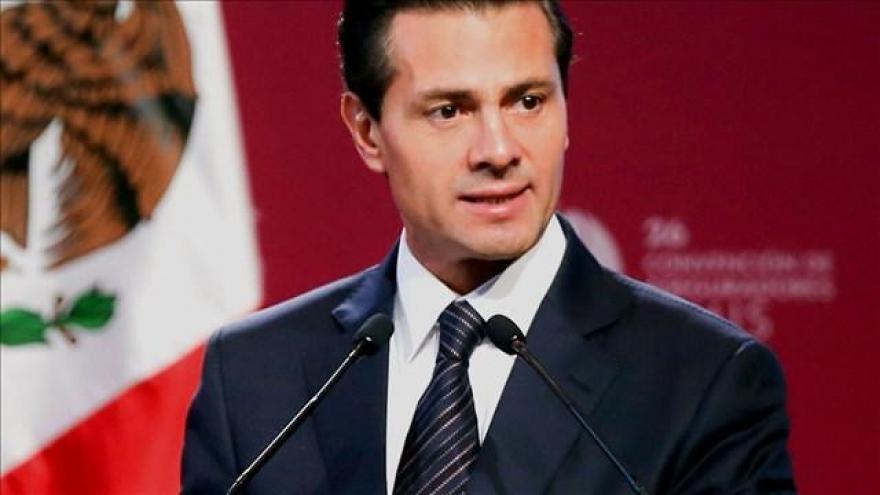 WASHINGTON (CNN) -- Mexico's president reiterated his nation will not pay for a wall along the US-Mexico border just hours after President-elect Donald Trump doubled-down on his campaign pledge to force the country to do so.

Mexican President Enrique Peña Nieto made his comments during a speech at an assembly of foreign diplomats at the National Palace Wednesday. While stressing his desire for a positive relationship between the two countries and naming several issues on which he said they could cooperate, Peña Nieto assured his nation they would not be footing the bill for Trump's wall.

"It is evident that we have some differences with the new government of the United States, like the topic of the wall, that Mexico of course will not pay," Peña Nieto said in the address.

In the days following Congress coming back into session, reports have emerged saying Trump has moved to break with part of his signature campaign pledge -- telling members of Congress that US taxpayers would pay for the border wall and not Mexico. But at his news conference on Wednesday, Trump vociferously denied these reports in part.

"Reports went out last week, 'Oh, Mexico is not going to pay for the wall because of a reimbursement.' What's the difference? I want to get the wall started," Trump said.

He said the US would move to build the wall quickly, using US money to fund the project at first before getting Mexico to reimburse the US. As for the mechanism he would use to force Mexico's hand, Trump was noncommittal outside of pledging it would indeed occur.

"We're going to build a wall. I could wait about a year-and-a-half until we finish our negotiations with Mexico, which we'll start immediately after we get to office, but I don't want to wait," Trump said.

He also recalled the earnestness and popularity of the wall at his campaign rallies, where he regularly did a call and response with his supporters over the promise to have the US' southern neighbor pay for a border wall.

During the campaign, Trump visited Mexico to meet with Peña Nieto. And although Nieto did not agree to fund Trump's wall at the time, afterward, Trump told supporters stateside that even though people in Mexico "don't know it yet," Mexico would pay for the border wall.

The stark difference between Wednesday's comments from the two North American politicians showed the disagreement remained as wide just days before Trump takes office as it was when Trump's victory was regarded as a longshot.

CNN's Angela Barajas and Deborah Bloom contributed to this story.