Mexico school collapse: All students accounted for as searches continue 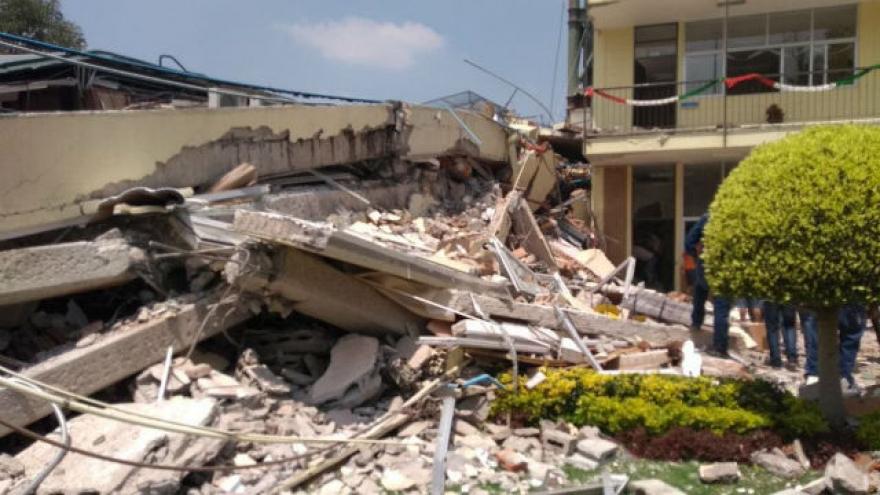 This photo shows the scene of an elementary school in Mexico City that collapsed due to an earthquake that hit the region. Photo courtesy Law Enforcement

(CNN) -- The search for a 12-year-old thought to be trapped in a Mexico City elementary school ended Thursday with the news that all students have been accounted for. But rescuers will continue their work, as signs suggest that someone may still be alive in the rubble, officials said.

The news brought an abrupt end to a search that riveted people across the country as they watched it unfold live on television. For days, Colegio Enrique Rebsamen was the site of a massive search and rescue operation offering a glimmer of hope in the chaotic aftermath of Tuesday's magnitude 7.1 quake.

By Thursday, authorities said they had determined the whereabouts of all the school's students, both alive and dead, said Angel Enrique Sarmiento, deputy secretary of the Mexican Navy. Authorities confirmed 25 dead -- 19 children and six adults -- at the school, and 11 more were sent to hospitals, he said. Meanwhile, he said government agencies leading the rescue "had no knowledge" about a report with the girl's purported name -- a statement that raised more questions than answers.

"We are certain that all the children either passed away, are in local hospitals, or are safe and sound in their houses," he told reporters.

Similar scenes played out across the region as volunteer brigades joined government efforts to reach survivors and clear away rubble. Amid the chaos, some Mexicans took comfort in how the disaster had brought them together.

The school rescue attempt was one of many searches underway Thursday, after the earthquake turned dozens of buildings in central Mexico into dust and debris, killing at least 282 people, including one in Oaxaca, almost 480 kilometers (300 miles) from Mexico City.

Tuesday's temblor was the second major one to hit the country in less than two weeks, following an 8.1 magnitude earthquake farther south on September 8, killing nearly 100 people. It hit hours after a citywide drill on the anniversary of the 1985 earthquake that killed an estimated 9,500 people in and around Mexico City.

President Enrique Peña Nieto declared a national emergency, and the country is observing three days of national mourning. An unaccounted number of people are staying at shelters around Mexico City after losing their homes. Schools have closed indefinitely, and millions remain without power.

Despite the president's request that people stay indoors while rescue attempts continue, residents joined forces with rescue teams to search for survivors.

'We know he is in there'

Throughout the region, buses carried volunteers from Mexico and beyond to disaster sites, where they bolstered search and rescue efforts. People formed long human chains to pass along supplies and and remove chunks of lumber and concrete.

It reminded some of the last time an earthquake of this scale hit the nation's capitol. One man, who gave his name as Roberto, recalled pulling people out of wreckage in the Mexican capitol in 1985. It was worse then, he said, crediting enhanced building regulations with minimizing the damage.

"I can remember the feeling of lifelessness in their bodies," he said. "I remember my hands sinking into their skin. They were decomposing. It was horrible."

In Mexico City's Condesa section, a large rescue operation was underway at a collapsed building that had housed an outsourcing company. At least 35 people are believed to still be buried in the in the rubble of the building on Alvaro Obregon.

Marco Antonio Garcia Salsedo believes his cousin is still alive in the building. His family heard that Angel Xavier Sousado Sandovar somehow placed a phone call to a friend in New York from inside the rubble.

The family had been camping out near the rescue site since Tuesday, holding onto hope that Sousado would emerge from the building. They don't want to miss an announcement and they don't want the government to raze the site before their loved one is found.

"We know he is in there and we are waiting for him," Garcia said.

Elsewhere in the neighborhood, police blocked a road leading to the corporate offices of a food processing center that also was damaged. Cristobal Perres Garcia, 59, said police told him that one of his cousins -- a worker at the building-- was among several who died when it collapsed.

In Puebla state, southeast of Mexico City, the quake crumbled a church, killing a girl who was being baptized and 11 others attending the event, Gov. Tony Gali said. More than 9,700 homes and 100-plus government buildings were damaged in the state, Gali said.

'I thought someone was kicking my chair'

About 2,000 public schools were damaged in Tuesday's quake, Secretary of Public Education Aurelio Nuños said. Sixteen of the 212 affected schools in Mexico City had serious damage, he said.

At the private Colegio Enrique Rabsamen, where rescuers were trying to reach the girl, the temblor caused the school to fold in on itself, sandwiching and collapsing classroom onto classroom.

Crews remained there Thursday the evening, but the sense of urgency of the previous night had dissipated, along with the crowds of onlookers. In their place, well-wishers left bunches of white floral arrangements around the block from the school.

The loss of life weighed heavily on volunteers.

"This is a tragedy," said volunteer Ivan Ramos. "It's kids. It will take a long time to heal."