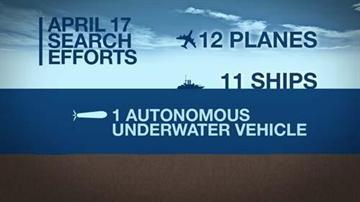 Martin Dolan emphasized that the $234 million price tag is a "ballpark rough estimate" of an extended search and salvage mission.

Searchers seem to be preparing for the possibility that an underwater drone scan of the southern Indian Ocean may not yield immediate debris from Malaysia Airlines Flight 370.

If no traces of MH370 are found, officials will be forced to review the operation and find a way forward, the Malaysian acting transport minister said Thursday.

"There'll come a time when we need to regroup and reconsider," Hishammuddin Hussein said. "But in any event, the search will always continue. It's just a matter of approach."

A later phase could involve a search along a large portion of sea highlighted by a partial digital "handshake" between the jetliner and an Inmarsat PLC satellite, Dolan said.

For now, search crews are awaiting data analysis following the latest scan by the underwater drone, which completed its first full mission Thursday.

The Bluefin was forced to abort its mission twice this week; the first time after it exceeded its depth limit and the second time over a technical issue. After the latter was resolved, officials dipped it into the ocean again.

Phoenix International Holdings, which owns and operates the equipment under a contract for the U.S. Navy, called the third dive "very productive," saying that the underwater drone spent nearly 13 hours at the sea bottom.

But after four dives, "there has been no debris or aircraft wreckage discovered," the company said.

Bluefin operators said they can reprogram it to operate at 5,000 meters (16,404 feet), giving it more leeway.

Officials believe a recent ping heard in the search area has the right frequency to belong to the flight data recorder's emergency beacon.

The quality of the "ping" led authorities to focus the underwater search in the area.

And as the underwater focus continues, officials faced other setbacks.

Preliminary analysis of an oil sample collected in the southern Indian Ocean shows that it is not aircraft engine oil or hydraulic fluid, Australia's Joint Agency Coordination Centre said Thursday.

Malaysia Airlines Flight 370 vanished on March 8 with 239 people aboard after taking off from Kuala Lumpur, Malaysia, bound for Beijing.

With no debris found so far and no possible pings from the plane's "black boxes" detected in a week, officials shifted the focus of the search underwater.

Those searches are probably nearing an end, officials said.

A technical glitch during a video conference to update Chinese families on the search Wednesday turned into a screaming match.

"You're all bloody liars, and you're lying to us again," one man yelled.

Families of the passengers attending the Beijing briefing exploded in anger and stormed out.

Chinese relatives of those aboard the flight have accused Malaysia of withholding information. They demanded an apology from the Malaysian diplomat behind the botched briefing.

"We will request their team of experts to come to Beijing to conduct face-to-face communications and fulfill their commitment," said Jing Hui, a spokesman for some of the families. "What is the truth? What problem do they want to cover up?"

The families have 26 questions they want answered. They included requests for shared evidence, including the flight's logbook and recordings of air traffic control the night the plane disappeared.

Most of the people on the plane were Chinese. Their relatives have become distrustful of Malaysian authorities and airline officials.

Hishammuddin defended his government's handling of the operation and accused the media of focusing on the Chinese families. He said relatives of other nations represented have not had problems.

"The most difficult part of any investigation of this nature is having to deal with the families in our case," he said.

A Malaysian delegation will travel to Beijing in a few days to advise families on the ongoing search.

Malaysia has put together a committee to work with the relatives, Hishammuddin said.