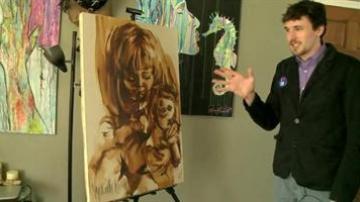 SOUTH BEND, Ind. -- A local artist purchased a $10 painting at a Michiana Goodwill store. After doing some research, he found out the painting was worth thousands of dollars.

Michiana artist Russell Frantom has an eye for the odd and the unique.

"It kind of stood out to me in a weird and creepy way, and I'm assuming that's why nobody else was buying it," said Frantom.

As he walked through the aisles of a Michiana Goodwill store, he saw a painting of a girl with her doll.

Although it was a little creepy, Frantom says that's how he knew it was something special.

Something maybe only a true artist can see.

He bought the painting for just $10 and decided to do some research.

He eventually found the artist's gallery in California, talked to her assistant and a few other people before determining the painting's true value.

Frantom said whatever he chooses to do with the painting, he won't sell it.

"I'm a little conflicted about what to do with it, I think that it would be selfish to keep behind closed door," said Frantom.

He says he's considering donating it to the South Bend Museum of Art.