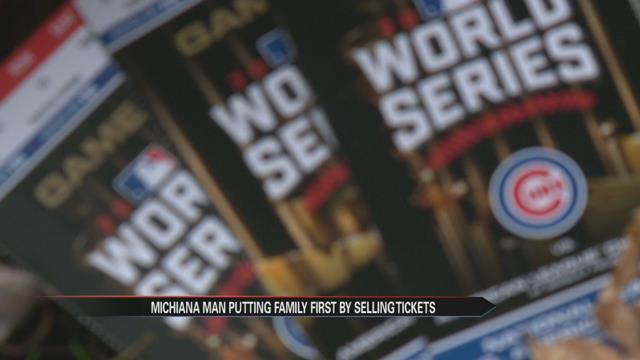 The Chicago Cubs are in the World Series!

Those words have not been uttered in 71 years!

As you can imagine ticket prices are soaring just before game 1 in Cleveland Tuesday night.

Ever since the cubs clinched a spot in the Fall Classic Friday night, Cubs fans have been going crazy.

Ticket prices for games three, four and five of the World Series at Wrigley Field have also been going crazy.

Travis Baird of Elkhart is looking to sell.

The average price for a World Series ticket at Wrigley is a whopping $7,500 and only going up.

Travis Baird was on the Cubs ticket waiting list for 14 years, and was with mixed emotions two years ago when he found out he finally got those coveted tickets.

His grandfather, a die-hard fan, was dying.

"He was a true Cubs fan. He always took me to games as a kid. I told him I got those tickets. That was the last conversation I had with him," said Baird.

Baird is now selling four tickets, for each of the three series games at Wrigley.

With the Cubs in the Series for the first time since 1945, it was a hard decision to sell.

"Hudson Baird was born during game five of the NLCS," said Baird.

A newborn son, born right before the Cubs won the pennant, is not a bad trade-off for this dad of five.

And no matter what happens on the diamond over the next few days, it'll always be a fall classic to remember for the Bairds.