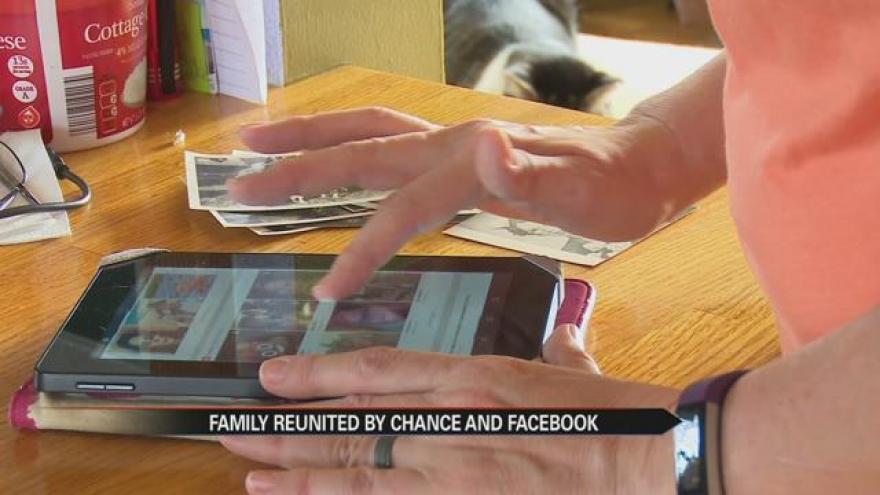 Thanks to a Michiana Facebook page and some curiosity, a Berrien County woman has been reunited with her half brother who she thought died decades ago.

“A little over two weeks ago, I was contacted by a young lady named Liane Gustafson who had found me on the Benton Harbor, St. Joe Memories Facebook page,” Sonja Gustafson Podjan said.

Sonja joined the group a few years ago.

She’s a Benton Harbor native who now lives on a blueberry farm in Watervliet.

The young lady reaching out was a stranger.

“I didn’t know her, so I went and checked out her page, and when I looked at her page, there was a picture of my dad with of his Afghan Hounds that he used to raise and show,” Sonja said. “The picture caption was, ‘This is my dad’s dad, who used to raise Afghans.’”

Sonja was a little confused, so she decided to respond.

“I made a comment on the picture that was, ‘If this is your dad’s dad, then that means that your dad is my brother and that you’re my niece,’” she said.

Sonja was soon able to confirm something she never thought was possible.

“My father, Swan, did have another son,” she said, reading the Facebook message she had sent. “But I had, for years, believed that he was killed in Vietnam. Is your dad still alive?”

His name is Andrew Lee Gustafson. He goes by ‘Lee.’

“It’s just amazing cause I always thought he was dead and I never thought I’d get to talk to him,” Sonja said. “I felt deprived!”

Sonja and Lee’s father, Swan, emigrated from Sweden to Benton Harbor in 1919.

He was married four times and had four children with three of his wives.

But Sonja and her biological brother Scot never learned much about their father’s past.

They knew they had siblings from his prior marriages, but not much else.

“My dad was a really private person, and, even with his children I don’t think he really spoke of his past,” Sonja said.

Swan died in his home country of Sweden in 1987.

He left his children some money, so Sonja and Scot started looking for their half brother, Lee, they had heard about.

A search in the late 1980s found a man who matched the little information they had. He had allegedly died in Vietnam while fighting in the war.

“The brother that I always thought – believed – had been killed in Vietnam in 1968 was not actually my brother,” Sonja said.

Thanks to the Facebook page and that message from Liane – Lee’s daughter – everything changed.

“My brother was alive and well, and living in the UP of Michigan,” Sonja said.

The reunited siblings spoke on the phone soon after.

On Thursday, Sonja called Lee again during her interview with ABC57.

“To find out that I’m a big brother, you know, was great!” Lee said.

Thanks to a Facebook page and Liane’s desire to learn about her father’s lineage, the Gustafson family has been brought together.

“I’m just really thankful that [the Facebook page] exists because that’s how Liane found me,” Sonja said. “If it hadn’t been for the Benton Harbor, St. Joe page, it would’ve been a lot harder for her to find me.”

Sonja and Lee said they’re hoping to meet in person, for the first time, in the next couple of months.

In addition to finding out about each other, the two also learned – thanks to Liane’s research – that their father had another son.

His name was Forrest Lee. He was Swan’s firstborn and died several years ago, but he has three children who live in California and Oregon.

Sonja said the entire family is anxious to learn more about each other, and hopefully get together, in person, one day.