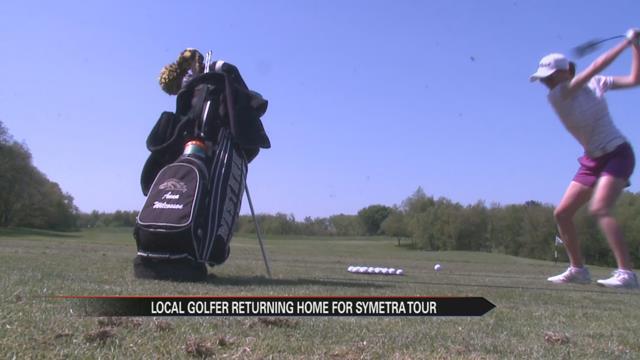 The Symetra Tour will once again be making a stop in South Bend this summer, as Blackthorn Golf Club will host the Four Winds Invitational, one month from now.

However, it’s one local Michiana golfer that's stealing the spotlight.

Thanks to a sponsors exemption, Anna will play in the 2016 Four Winds Invitational next month at Blackthorn Golf Club in South Bend.

Playing once again on a course that she is so familiar with.

“I’ve grown up here my entire life, so I know the ins and outs of it pretty well. The course itself is pretty awesome. I feel at home and comfortable. It should be a good experience,” said Anna.

“When you have a dream and you stick with it, through the years, that’s a major accomplishment. Since she was a very young girl, she’s wanted to do golf and be on the LPGA tour and this is really helping her,” said Ron.

Sponsor exceptions are used to give amateurs and up and coming players the opportunity to play in tournaments and compete against professionals.

“One of the neat things about running this tournament is every year you get to pick two players that get sponsor exemptions that normally wouldn’t be able to play in the tournament,” said Tim Firestone, Owner of Blackthorn Golf Club.

But don’t think Anna is just satisfied to be here.

“I want to make the cut and hopefully win. That’s the ultimate goal. I want to take this opportunity and use it to my best advantage. Hopefully it gets me to the next level to where I can get my card and get on tour and stuff like that. I’m really excited for this opportunity to be out here,” said Anna.

For Wilcoxson and her family, it's a dream come true playing a familiar course In front of familiar people.

“My college coach will be here as well. As far as I know, all my family and friends will be here also. It’ll be very exciting to play in front of them,” said Anna.

“For college golf, she travels a lot, and she never gets to play in her own community. So for all the people that have watched her and supported her all these years, we’re just happy that we can share this experience with them and I know the whole community is going to be proud of her,” said Sherrie Wilcoxson, Anna's mother.

The Four Winds Invitational will kick off Friday, June 17.