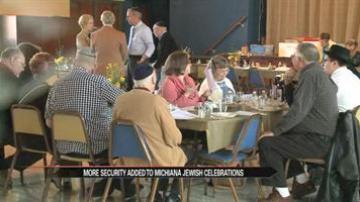 BENTON HARBOR, Mich. -- Because of the shootings in Kansas City at Jewish centers, leaders at the Temple B'nai Shalom in Benton Harbor added extra security for Passover.

"It does give us a concern, although we have not had any problems here, you never know," said Richard Wright, the Co-President of the temple.

Passover is a cause for celebration in the Jewish faith, as they celebrate the freeing of slaves from ancient Egypt.

"You never know when copycats might try to emulate what this deranged anti semitic person did," said  Wright.

A member of the Benton Township Police Department stood guard at their Passover gathering, armed and on alert.

"Normally we would not have had security," said Wright.