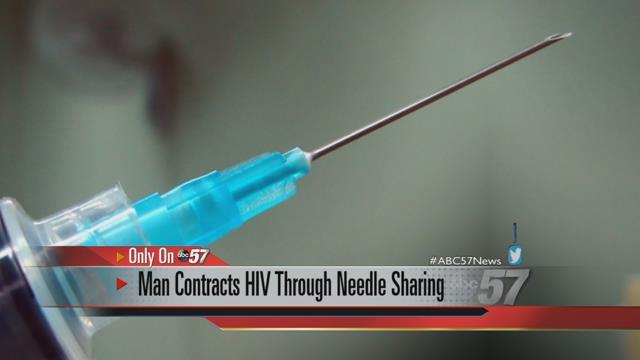 Drug abuse and addiction is a nationwide problem. A Michiana man shared his story of addiction and his journey to becoming clean. He recently got a diagnosis that changed his life.

Adam and his wife started to donate plasma a couple months ago as a way to earn extra money. They went to donate one day and Adam was rejected.

“One day we both went to the plasma center to get tested and they wouldn’t register me in so they took me into the back room all showed me the paperwork and told me the disease that I had,” Adam said.

He had no idea when he went in that day what he would find out later.

“It was like it was the end of the world. Now your days are limited. Now you’re going to die sooner than you thought, sooner than anybody thinks.”

He started doing drugs like cocaine and heroin when he was about 14.

“I’ve been a drug user, intravenous needle user. I started shooting cocaine when I was about 14,” Adam said.

He is now 24 and during those years had many overdoses and shared needles with a lot of different people.

“I’ve heard rumors of people having hepatitis and things like that and I’d still use their needle. One time I shot up heroin after this girl. Literally as I pulled the needle out and rinsed water through it, she told me that she had Hepatitis. It was like a trick.”

However, he said his recent diagnosis was enough to make him stop shooting up and sharing needles.

“As soon as they told me it was like a punch to the gut, I couldn’t believe it.”

He was at Octapharma Plasma in South Bend when he got the news. A punch that came in the form of HIV/AIDs and Hepatitis.

He believes it is important for people to know that needles cannot be cleaned and reused again.

“People that shoot up and use needles think that they can take bleach and can rinse the needle out or heat up some water and run the needle through some bleach, well you can’t do that. The blood borne pathogens stay in the needle.”

He lives everyday with incurable diseases but wants to use his story to help other people who want to kick the high.

“I puke literally every day. I can’t keep a meal down. Usually at dinnertime, I puke it right up. I want to puke every morning when I wake up and I try to hold it down, I’ve been doing good in the mornings.”

He does not want to see other people end up in the same situation he is in.

*The name in this story has been changed to keep the identity of this man private.