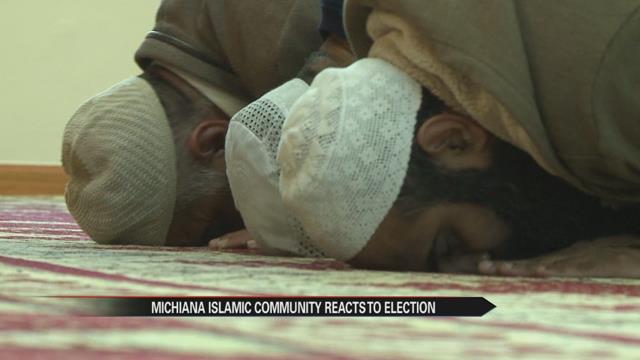 Almost a full week has passed since the country learned of the surprise election results that will put Donald Trump into the Oval Office.

Citizens across the country are now questioning if he is the right man to lead the United States.

That concern was expressed Monday from Mohammad  Sirajuddin, the 19-year leader of the Islamic Society of Michiana.

“This type of person doesn’t seem to be the person to be the leader of such a great country.”

Sirajuddin said some of the statements Trump made pre-election were unacceptable.

“He used anti-Muslim rhetoric, it was anti-Hispanic, immigration and it was anti-woman and he mocked the disabled,” said Sirajuddin.

Nearly a week after Trump was elected the 45th President of the United States, protests are still spilling into streets across the nation, including in South Bend this past weekend.

“To show that and support each other, especially for the people who are worried or concerned as to what will come,” said Sirajuddin.

The Imam even took part in a peaceful rally in South Bend on Saturday.

Masood Rana is an active member of the Mosque.

“The community is very peaceful and they will work with this new one too as long as we are united,” said Rana.

The ISM posted the following message to their website after the election, calling for peace and togetherness.

“As right wing republicans across the country celebrate the outcome of this historic election, we as Muslim Americans should remain optimistic. It is undeniable that the rhetoric emerging from the camp of the president-elect over the past year has made many minority groups including Muslims in this country fearful for their own safety, and that of their families and friends. Furthermore, it seems inevitable that those who are hateful towards Islam will become more emboldened to carry out acts of hatred and bigotry. However, in this atmosphere of turmoil and uncertainty, we Muslims believe that everything that happens is by the decree of God, Almighty. Though the consequences of this election may seem negative, it may also bring about much good. We look forward to seeing an awakening of the hearts and minds of all Americans as they recognize that the best America is an inclusive and united America. And that those who seek to exploit our inner fears will no longer garner our votes. Let us not forget that political power in this country is not permanent and Donald Trump is not a king. We believe that through our continued engagement in our civic duty, the American spirit to stand up for social justice, civil liberties and participation in the political process we can bring about change for the better.”

All the community can do is hope and pray that the President-Elect will promote a message of unity once he is inaugurated two months from now.

“Time will tell and we hope for the best. We hope that the President-Elect and his administration will reach out to the minorities and to those who are hurt by the rhetoric of racism and xenophobia,” said Sirajuddin.