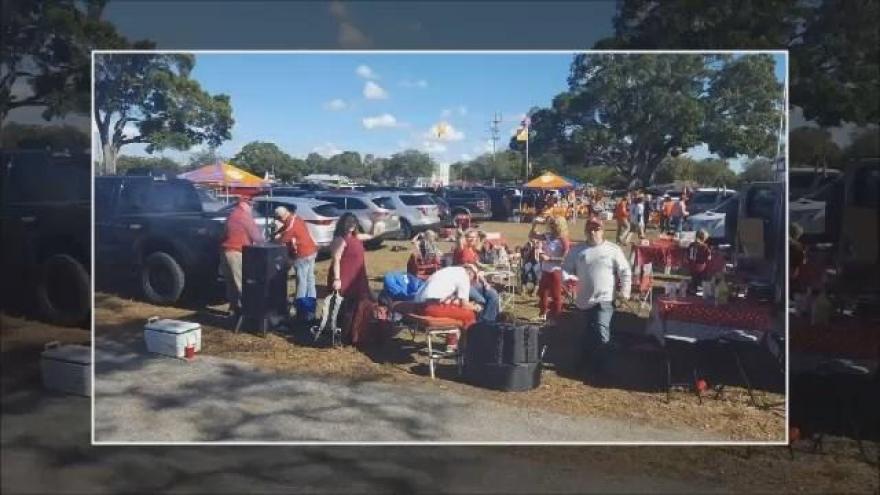 There’s a Michiana connection to Monday night’s College Football National Championship as Clemson gets ready to take on Alabama, we caught up with some local names you might recognize.

Fans were tailgating all morning in Tampa Bay, Florida. Including some Michiana families who have sons competing against each other on the field.

ABC57.com’s Andrea Alvarez linked up with them on social media to see how they’re supporting them before the game.

Alabama Wide Receiver Gehrig Dieter’s family was out there supporting him big time in the “BAMA-lance” Monday afternoon. Dieter is a 2011 South Bend Washington High School graduate. He transferred from Bowling Green after a standout final season with the Falcons. He's spending his last season at Alabama playing a key role in one of the top receiving corps in the nation, and his family was there to support. His dad, former South Bend City Council President Derek Dieter and a family friend Jeff Baugh joined us on Skype.

“Myself, Gehrig’s mother, all of his brothers and sisters all of our great friends watching him play tonight in the national championship so it’s a dream come true for him. He;s wanted to do this since he was three years old throwing the nerf ball in the front yard of the house on Portage Avenue so we’re very happy that he has this opportunity,” said Gehrig’s father, Derek Dieter from his tailgating spot in Tampa Bay, Florida.

And we didn’t forget about Clemson. Clemson slot receiver and running back Ryan Mac Lain’s parents were also out there supporting. Mac Lain graduated from Plymouth High School in 2015 and was recommended to Tri-County Community College where he set his goal on his psychology degree and pursuing the Air Force. He was told by his coaches, Dabbo Swinney and player Mike Dooley that if he kept a 3.0 he would be a preferred walk-on for the Tigers. He obtained a 3.5 and became a full time Clemson student as well as solidified a spot on the team. We caught up with parents Doug and Kay Mac Llain via Skype, too.

“Just excited that he’s on the team and very humbled by the whole experience. We’d like to say hi to our son, ‘Rhino’, Ryan MacLain, number 89 on the Clemson Tigers, we love you buddy,” said Ryan’s Father from tailgate festivities also in Tampa Bay, Florida.