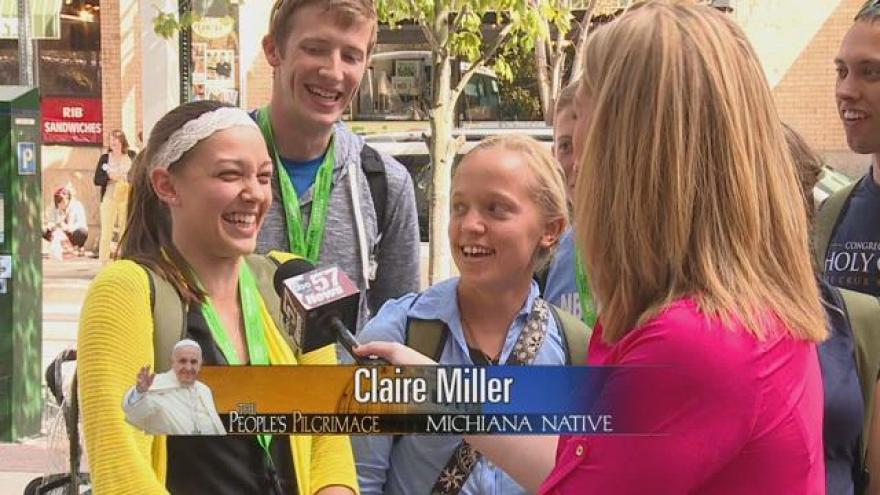 Hundreds of thousands of people continue arriving in Philadelphia as the World Meeting of Families conference wraps up and the city prepares for the arrival of Pope Francis.

A young group from South Bend and Fort Wayne traveled to Philadelphia with hopes that this trip will bring a renewed interest to the Catholic Church among other young adults.

“One of the most powerful experiences I’ll take away from that trip, although seeing the Pope was amazing, it was being in adoration with people from all across the world. For me it’s an opportunity to renew those feelings and renew that experience. But I think Pope Francis is an entirely different pope,” said Jeff Vallier who also saw Pope Benedict several years ago in Madrid.

It has become an emotional experience for some of the teens like Claire Miller from South Bend.

“I feel like crying just thinking about it. I think I will be in a state of emotion for sure. I think they love his message of love. I think a lot of young people are looking for something that’s missing like a void and he has that and he’s bringing that to everybody, he does that through his service and the truth that he’s spreading and people love that about him,” said Miller.

A couple tells ABC 57 that they are excited to be a part of this historic event but they are also excited to see so much interest in the Catholic faith with other young adults.

“I think that’s really what the new evangelization needs the momentum from the youth to get the youth back. I think it’s wonderful the Catholic Church is aware of that and it’s drawing in the youth,” said Michelle Cooper.

These students are going to be among the 1.5 million people, including a group from Holy Cross and Notre Dame, who will attend the Papal mass.