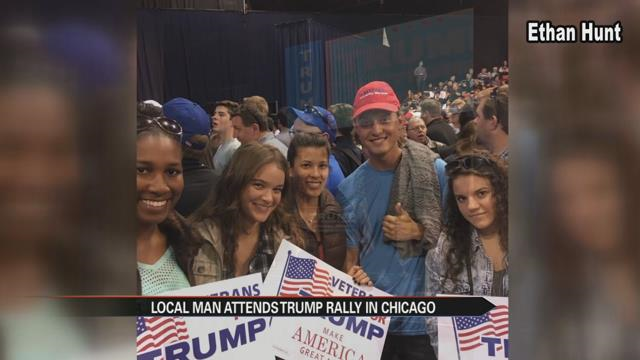 What was originally planned to be a night of political cheering quickly turned into a night of violence that caused GOP front-runner Donald Trump's rally in Chicago to be canceled.

The rally was scheduled for Friday evening at the University of Illinois at Chicago but before it ever started, officials had to cancel it.

Ethan Hunt is a student at Bethel College who is majoring in Political Science and wanted to go to the rally to gain experience and political knowledge. “It was just something I was excited about and it turned out a little bit differently than I expected,” said Hunt.

Hunt said he stood in line for about five hours prior to the rally. He managed to get a spot only feet away from where Donald Trump would have addressed the crowd.

“Once you got inside, everyone looked like a Trump supporter. Once the rally had been postponed, it turned into a different thing,” he added.

Hunt recalled that protestors ripped off Trump supporting shirts and had Bernie shirts underneath.

"It was pretty scary. It’s like you’re in a bubble waiting for it to pop. You’ve got the police on the outside and people on the inside started fighting and there was no one to really stop it,” he said.

Once he got outside of where the rally was held, he saw protestors and fighting in the streets.

“You see things you only see on TV. You saw the police officers on their horses with their batons literally in formation and standing there.”