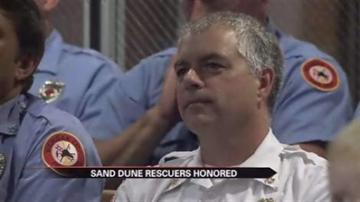 MICHIGAN CITY, Ind.--It was nothing short of a miracle on Mt. Baldy. The dramatic rescue of a six-year-old, pulled from beneath 11 feet of sand last month. Little Nathan Woessner is back to being a normal kid, but the memories of those four harrowing hours still haunt the Michigan City rescue crews.

The mood in the council chambers Monday night was joyful but also somber. The men who saved Woessner's life last month were extremely humble and said they were simply doing their job.

A miracle is not something everyone believes in, but for Michigan City firefighters, it's something they witnessed with their own eyes, and felt with their bare hands.

It was the moment they pulled 6-year-old Nathan Woessner from 11 feet of sand, alive.

“I have a 3-year-old son so to see that he survived it makes you really start believing. If you didn’t believe before, what else can make you believe now?” Michigan City firefighter William Roddy said.

“Are we ever going to find him? Where’s he at? Is he right here? Are we in the right spot? Did we miss something? What could we do more of? Is there anything else we could be doing?” Roddy said.

Battalion Chief Daryl Westfall knows they did just what they were supposed to. He's not surprised of the heroism he witnessed on Mt. Baldy that day.

“These are my guys. You can never be more proud than this moment of anybody, they did such a fine job. It just reinforces everything we know about these guys." Westfall said.

It's something that's forever changed him. Nathan Woessner's face is a face he will never forget. It's the smiling face of a survivor, who by all odds shouldn't be here. It's the face of a real-life miracle.

“I just shake my head all the time. I tell people if I wasn’t there I wouldn’t believe it. It’s incredible,” Westfall said.

Nathan Woessner has since made a full recovery. Another event will be held later this month to honor the firefighters who rescued him, which the governor is expected to attend along with Nathan's family.