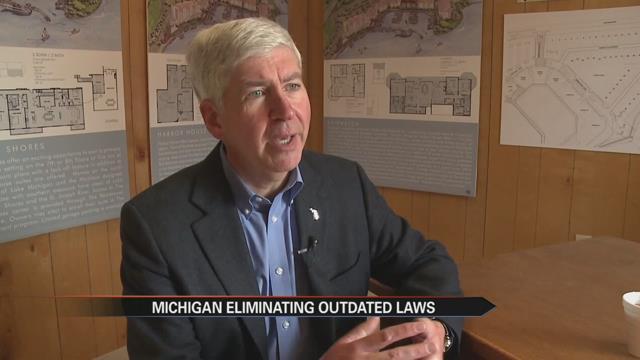 In an effort to get with the times and modernize Michigan’s government, Governor Rick Snyder signed several bills on Tuesday, eliminating outdated laws.

Take for instance, Section 114 of the Michigan Code of Military Justice.

According to that law, a person who knows of a duel challenge and fails to report it promptly must be punished as directed by a court martial.

If that law sounds ridiculous to you, Governor Rick Snyder is right there with you.

In an effort to modernize state government, Governor Snyder signed legislation repealing laws like the one you just heard.

Others include getting rid of a criminal penalty that has to do with failing to post a registration card when camping on DNR land.

And maybe the most bizarre out of them all, is a bill that could get you jail time for playing the national anthem out of tune, which was also repealed.

Some of those now repealed laws were over a hundred years old.

In May Governor Snyder said a good way to stop overcriminalization is to put an end to laws that are redundant and outdated.