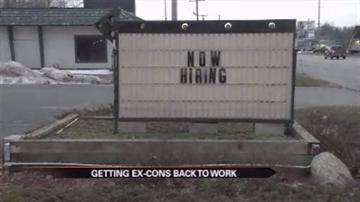 According to the Michigan Department of Corrections, in 2011, more than 11,000 prisoners were released on parole.  Finding work after being released from prison has proven to be extremely difficult.

Democratic lawmakers in Michigan are rallying to "ban the box."  Last week, an ordinance was introduced that would forbid employers from asking about felonies on job applications.

"When people check that box on the job application that says have you been convicted of a felony or misdemeanor, they don't get that opportunity to interview," explained Monica Jahner, with the Advocacy Reentry Resource Outreach in Lansing, Michigan.

Jahner says the current system creates a vicious cycle because ex-cons are continuously turned away from work.

She says generally, when employers see that felony box checked, they throw the applications in the trash.

If passed, this bill would only change the application process.  During interviews employers would still be able to ask about legal history and even run background checks.

The ordinance was introduced in the beginning of March, lawmakers hope to see some movement on it within this year.