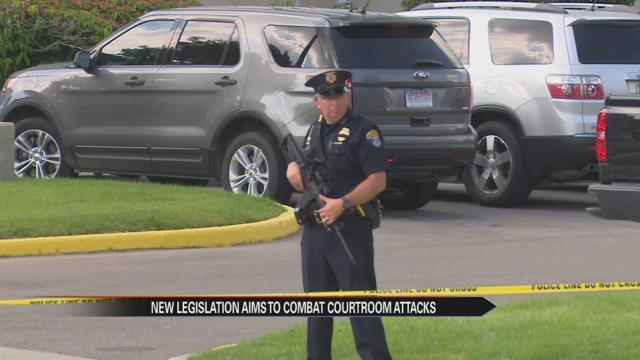 Since Wednesday, two bills are in the works for Michigan in hopes of cracking down on courtroom attacks. One makes attempted assault in a courtroom a felony, while the other focuses on increasing sentencing.

Curtis Hertel Jr, a State Senator, mentioned Berrien County’s Courthouse shooting is part of the reason why these bills are very important to pass. Not just for justice, but for the safety of everyone in the courtroom.

“There is no crime in Michigan for attempted assault in a courtroom,” he said.

In early August, in a Lansing Courtroom, defendant Joshua Harding was armed with a homemade knife. Video shows Harding proceeding to hurt one of the prosecutors. In the end he was only charged for sexual assault, not the attack.

These bills were introduced by Lansing- area lawmakers and they were inspired by that attack at the Veterans Memorial Courthouse and the deadly shooting in the Berrien County Courthouse.

“Those people that are out there protecting us and insuring justice should always be protected,” said Hertel Jr.

Those like Harding, who try to attack court employees, will face felony charges.If there is a conviction, the person responsible would face 15 years behind bars. That’s up five years from what it originally was.

State Representative Sam Singh, who pushed for the maximum sentence, says these bills are needed.

“We wanted to heighten the sentencing guidelines for these types of attacks because we’re in a vulnerable space and we want to protect those court employees,” Singh explained.

These bills are still in the early stages and a lot still has to be done before they reach the Governor’s desk.