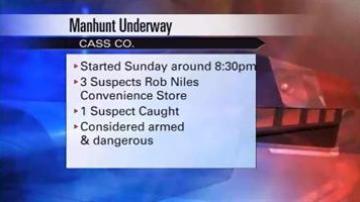 CASS COUNTY, Mich. — A manhunt on the borders of Berrien and Cass County lasted until early Monday morning.

It all started aroud 8:30 Sunday evening on Front Street in Niles after police responded to a robbery at a convenience store.

Police say at least one suspect remains on the loose and is considered to be armed and dangerous.

After the robbery, the suspects took off in a car. But somewhere between Niles and Dowagiac on M-51, the suspects crashed the car and took off on foot.

Sheriff's officers from Berrien and Cass County joined the Niles Police Department and other agenices in tracking down the suspets using K-9 unites.

They were able to capture at least one suspect. But police are not saying how many are involved.