Michigan requires students to take 2 years of a foreign language 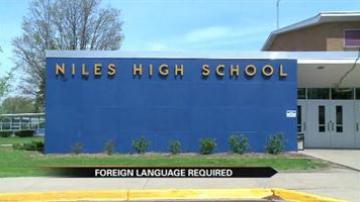 NILES, Mich. -- A new law in Michigan means all students will be required to take 2 years of a foreign language beginning with the class of 2016.

Some students say it's hard enough to fit in all the classes they want along with all of the required classes.

Others say they aren't interested in learning a new language, they would rather take classes that will prepare them for future jobs.

"Anytime we do something in education, it comes down to what's best for kids, I don't think this is best for kids," said Chris Porter, Assistant Principal at Niles High School.

Sophomore Kelsey Barton is in the first class affected by the new law.

She says she got Spanish out of the way early.

"I had to have 2 years of it, so I just wanted to get it out of the way fast so I could take other classes that I wanted to take junior and senior year," said Barton.

What if she hadn't gotten it out of the way already?

"Then I wouldn't be able to take the classes that I wanted to take. I would have to take those as a requirement. I wouldn't have more freedom,' said Barton.

"What we object to is limiting kids' options," said Porter.

He says many students would rather enroll in the alternate programs, but now that'll be much harder.

This language requirement is for all the students, even the special education students.