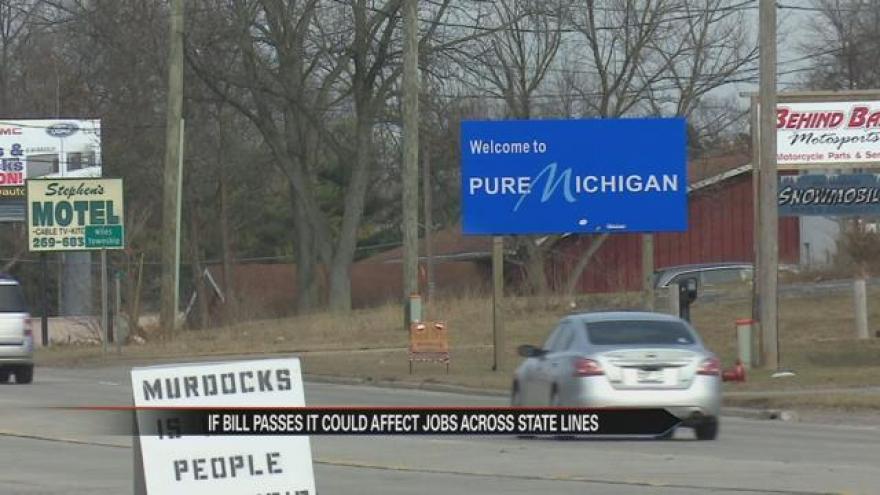 “We want to recognize that we need to compete, and this is a tool that will give Michigan a chance to compete on level playing field with the state of Indiana,” John Proos, Michigan State Senator for the 21st District, said.

Michigan Senate Bill 40 is the brainchild of state senator Dale Zorn, whose district in eastern Michigan falls right along a state line like southwest Michigan.

“This bill will give companies credit for all the jobs that they’re creating, not just jobs that are filled by resident employees,” Southwestern Michigan Economic Growth Alliance Executive Director Barkley Garrett said.

The bill proposes expanding “the ‘qualified new job’ definition to include a job performed by a non-resident who is employed by a business located in a Michigan border county.”

The state of Michigan offers incentives to ‘primary businesses’ – like manufacturing companies – when they set up shop in the state.

“Those incentives come in the form of cash back to a company that helps to offset some of their startup costs,” Garrett said.

But currently, the amount of incentives a business gets is based on the number of Michigan residents it employs.

For a company in Niles, that means any employees who cross the state line to come to work don’t count.

Senate Bill 40 would change that.

“I think this is going to have a significant impact because of the fact that no other state in the nation has a bill like this,” Garrett said.

Proos agreed, saying this new law will not only bring more jobs into the local economy, but it will help businesses that are already here.

“If you’re driving from Elkhart or South Bend or LaPorte and coming into the state of Michigan to work, you’re likely then to also stop at our grocery stores, you’re likely to stop at our fast food and regular food restaurants, our dining establishments, our gas stations, and guess what? That benefits the state of Michigan as a whole,” Proos said.

Niles resident Andrea Winfield is also on board.

“Any benefits, even if you’re benefiting the borders of Michigan, it’s gonna benefit the entire state,” she said.

The bill was passed by the state senate this week and will be voted on by the house next.

Garrett said manufacturing jobs are usually the focus – rather than retail – because things like supermarkets and clothing stores will come whether there are incentives or not.