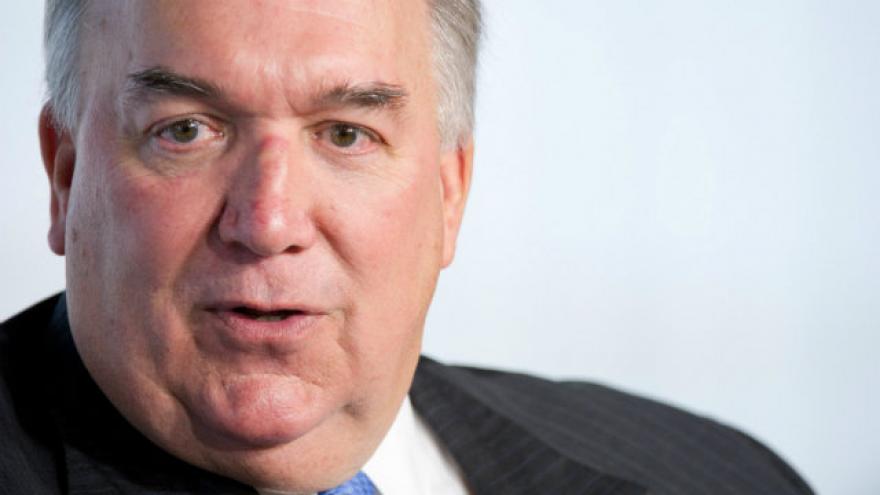 John Engler was the Republican governor of Michigan from 1991 to 2003. Photo courtesy David Paul Morris/Bloomberg via Getty Images

Engler was chosen "from outside the institution to provide strong leadership during this critical time," according to board Chairman Brian Breslin.

Engler, a longtime Republican politician who was governor from 1991 to 2003, takes over for Lou Anna Simon, who resigned last week.

Facing students, faculty and journalists Wednesday, Engler said his main concern as interim president would be to the survivors of sexual abuse.

"We owe it to them to fix the problems and to change the culture so that a better MSU will be their legacy, and that they know something positive came out of their suffering," he said, reading from a statement he said he wished never had had to be written.

Engler said he would move forward as if his own daughters were on campus, to implement changes swiftly and to protect "all Spartans," anyone affiliated with the campus, from sex assault harassment and bullying.

At times the exchanges between Engler and the crowd grew testy.

Dan Martel, president of the Michigan State University Democrats, said he was "sick and tired" of the board of trustees ignoring him. He made a series of requests, including asking for a town hall as soon as possible, and a plan to address shortfalls in transparency at the university. A woman who didn't identify herself other than to say she's a "faculty person," said the board was not soliciting feedback from faculty.

At the end of the press conference, folks in the room chanted, "Shame," repeatedly as Engler and members of the board exited the conference room.

In an Ingham County, Michigan, court over the past two weeks, more than 150 women spoke out about Nassar's two decades of abuse. Several of those victims said they reported his abuse to various Michigan State leaders but their concerns were brushed aside or not taken seriously.

"I told Michigan State University back in 1997," Larissa Boyce said in court. "Instead of being protected, I was humiliated. I was in trouble and brainwashed into believing that I was the problem."

Others have criticized the university and the board of trustees for their response over the past 18 months to the revelations of Nassar's abuse. Last week, MSU trustee Joel Ferguson apologized after he tried to downplay the abuse case by saying there "are so many more things going on at the university than just this Nassar thing."

Simon's resignation letter was similarly criticized for its seeming unwillingness to take responsibility for Nassar's abuse.

"As tragedies are politicized, blame is inevitable," Simon wrote in her resignation letter. "As president, it is only natural that I am the focus of this anger."

Michigan Attorney General Bill Schuette has appointed a special prosecutor to search "every corner" of the university and to understand how Nassar was able to continue terrorizing young women for so long.

Michigan State has denied there was any cover-up of the abuse and has apologized to all those affected by their failure to stop Nassar.

"To the survivors, I can never say enough that I am so sorry that a trusted, renowned physician was really such an evil, evil person who inflicted such harm under the guise of medical treatment," Simon said.

"I know that we all share the same resolve to do whatever it takes to avert such tragedies here and elsewhere."