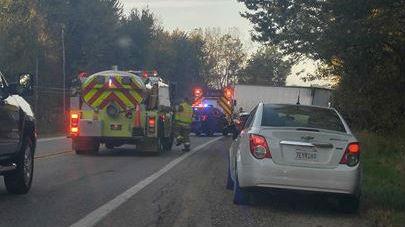 Berrien County Deputies responded to the scene of a semi vs car accident Wednesday morning that left the car upside down.

Deputies say a 46-year-old female from Berrien County was traveling westbound on US-12 near Sage Road in Bertrand Township Wednesday morning and a 52-year-old Illinois male resident was driving a semi heading eastbound on US-12 when the crash happened.

Police say the woman crossed the yellow lines and the semi driver attempted to avoid the vehicle but could not.

That’s when the semi and car collided, causing the car to roll onto its top.

Officers say the woman was able to get herself out of the vehicle and that no extrication was needed.

The woman was transported to Memorial Hospital in South Bend with non-life threatening injuries.

The woman was cited by police for careless driving and the road was closed for a short time as crews cleaned up the scene.

Alcohol is not believed to be a factor in this crash.