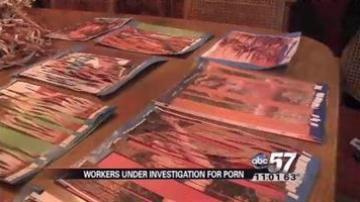 MIDDLEBURY, Ind. -- The Middlebury Wastewater Treatment plant is under investigation.

Now the pair says their boss is retaliating against them for going over his head and they plan to sue.

These shredded pieces of paper are pornographic images that James (Jimmy) Koontz and Joel Stoffel say their coworker was viewing while at work.

“I saw my coworker looking at pornography on the computer," said Koontz.

Koontz says he wanted to go to his supervisor, but didn’t feel comfortable.

“My supervisor was not happy with me," said Koontz.

So unhappy Koontz and Stoffel say their supervisor began to retaliate against them. They were both written up. Their boss wrote this.

“I recommend that Jimmy be given a chance to become a team member and to lose his attitude and hostel manner. If he cannot, his employment should be terminated immediately," said Koontz.

Koontz says his job is important to him.

“I am the only one in my home who earns a paycheck. I have a wife and two small kids," said Koontz.

He said he didn’t know what we were talking about and that even if he did, he isn’t at liberty to say.