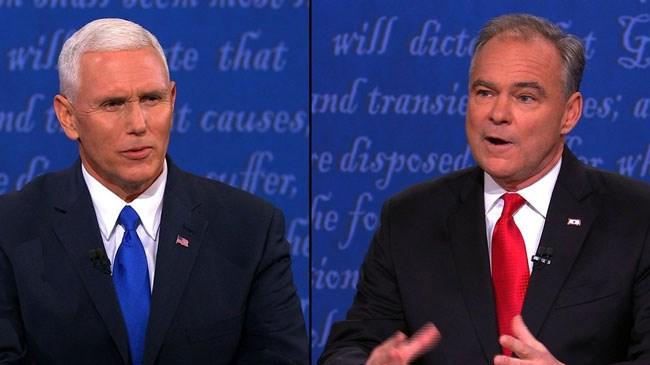 LOS ANGELES (CNNMoney) -- The media narrative heading into the vice presidential debate was that it would be a colossal snooze. After a steady diet of Donald Trump and Hillary Clinton, and given all the heat atop the tickets, Mike Pence and Tim Kaine ostensibly resembled a scuffle between '70s sitcom dads.

That fit a pattern of sorts: The vice presidency has always been ripe for ridicule, from the HBO comedy "Veep" to Al Gore's joke that the office bore the honorary title "Your Adequacy."

But what emerged in this debate wasn't two bumbling fathers, but an extremely contentious, feisty affair. Pence seemingly won it on style points by virtue of his calm, folksy answers, even if he often sidestepped the questions; while Kaine appeared over-eager -- or over-caffeinated, as several analysts put it -- to pounce on his opponent's statements, visually champing at the bit during Pence's windier responses.

Kaine's zealousness to prosecute his case included frequent interruptions that resulted in unintelligible stretches and placed considerable pressure on moderator Elaine Quijano, an anchor at CBS News' live digital channel. Indeed, the camera repeatedly caught Kaine turning toward Quijano while Pence spoke, as if he was just waiting for the green light to tear into Trump.

While Quijano faced a difficult task in refereeing -- and commendably prodded the candidates to actually answer questions that Pence, in particular, avoided -- it felt as if she was too committed to working through her lineup of questions, occasionally cutting short exchanges that should have been allowed to play out a bit longer.

Yes, there was a preordained structure agreed to by the campaigns. But with the two candidates going back and forth about foundations and charities, maybe we could have waited to hear -- or even skipped -- a hypothetical about North Korea.

Ultimately, both men seemed determined to squeeze in talking points and what Pence referred to as Kaine's "pre-done" lines -- a fair criticism, but one that would have had more oomph if Pence himself hadn't repeated several phrases over and over, such as referring to the Obama administration as "feckless," or quipping that he looked forward to working with a still-Sen. Kaine after the election.

Although Kaine stumbled in regard to style, he might fare a bit better on substance in the post-fight analysis. He did manage to put Pence on the defensive at times, and some of the direct Trump quotes that Pence denied or shook his head at will surely yield plenty of post-debate fact-checking.

The two notably settled down, somewhat belatedly, during the last half-hour, which produced a few thoughtful exchanges about policy differences, such as abortion. By then, though, the ruling on this undercard event had likely been registered: it was, to borrow Gore's term, an adequate debate.

Granted, "adequate" is a low bar that Kaine-Pence only sporadically cleared. But in this political year, an adequate debate is less of an insult.