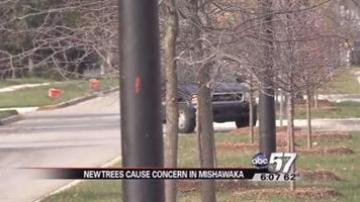 MISHAWAKA, Ind.--"All of a sudden, the trees popped up there, they are different sizes and different types", said Milburn resident Tom Black.

Tom Black has lived along Milburn Boulevard for 15 years.

"It adds something to it.  It will be nice I'm sure", said Black

The engineering office for the city of Mishawaka says the trees are the finishing touch to the Milburn project.  The main goal was to redo the sewer systems and sidewalks.  To do that, they had to take out a number of trees.  The city decided to replace the trees with new ones in the middle of the new medians.  Black says the trees are a traffic hazard, especially around Lasalle Elementary.

"But kids like to dart in and out of the street and that is what bothers me, because we have a lot of children around here and they do cut across the street", said Black

Black also wonders where the city got the money for all of these trees.

"I don't know what the budget is.  Maybe it's an election promotion for the mayor or somebody.  Haha", said Black

So we asked the city today and they told us they were not sure.  They said they would have to look through a bunch of files, because the project was so big.