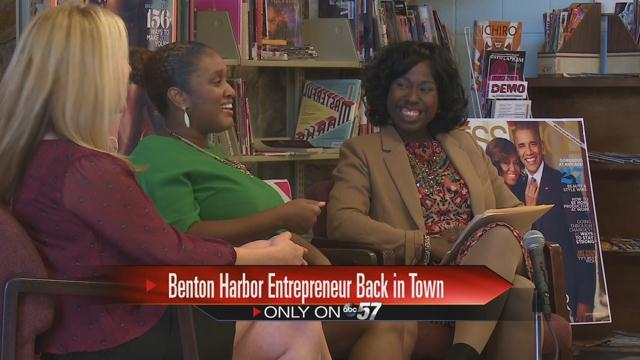 She’s a Benton Harbor High School alum turned self-made millionaire; and she came back home Monday to speak with girls striving to be just like her.

“Benton Harbor lives in me,” Psyche Terry said. “So it’s absolutely important for me to come back and give back to the students of the school.”

Psyche, a graduate of Benton Harbor High School, did just that before a crowd of 100 female students Monday morning.

“It gives me a lot of inspiration and motivation to be a better person,” Benton Harbor High School senior Davieonna Nichols said.

Terry is a self-made millionaire who started a lingerie company for plus-size women that has exploded; even landing her on national TV.

“How big is the company now?” host Steve Harvey asked Terry during a taping of his talk show.

She now lives in Texas, but came home Monday to kick off her new national “Girls That Rock” campaign, which she says in inspired by women like her who were raised in Benton Harbor.

“We really want girls to walk away with an understanding of empowerment, and success, and to be healthy, and to stay educated,” Terry said.

Terry brought two friends along who work for Essence and People magazine, and the three women spoke with the girls about succeeding professionally as women.

“I love her,” Pearson said. “I mean, she was a great student, and even in the eighth grade I could tell that great things were going to happen by her.”

And now, Terry is passing on her motivation to the girls sitting in the seats she once sat in.

“It shows you that anybody can be successful and that Benton Harbor is not a bad area,” Benton Harbor High School senior Jurnee Agbowu said. “We have plenty of programs and people to come back to help us get to where they’re at right now.”

Pearson, the new interim principal, said the event is all part of what he’s calling the “rebirth” and “renewal” of Benton Harbor High School.

He said he wants to expose students to people and places they may not normally see, so he said Monday’s event is the first of many.