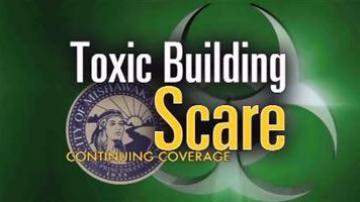 MISHAWAKA, Ind. -- The Mishawaka City Council is reacting to the Baycote chemical fire that put the city on edge Friday night.

Just hours after our interview with Mayor David Wood, he addressed the city council to rreassure them that the neighborhoods surrounding the old Baycote building are safe while the chemical cleanup continues.

Although concerned about what happened, the council said the city handled the situation as best they could.

Friday's chemical fire, at the metal finishing company's abandoned building, hit close to home for some coucil members. "I know that they contacted the neighbors quickly, again with my mother-in-law being one of them, they were knocking on her door while she was on the phone with us," said councilman Mike Compton.

Compton applauds the efforts of all the police and fire crews that responded that night. The mayor also praised emergency responders when he addressed the council Monday night.

The mayor also reassured the council there are no safety concerns at the site. Mayor Wood called it an unprecedented event the city has never seen before and told the council he is already looking at what the city could have done better. "I think they did a lot of things right, but ya know with any operation there are always things you can do better," agreed Council President John Roggeman.

"I have seen the police and fire react in this town before and they have never let me down and they always do a great job," said Compton. Council members said this was a unique situation.

Councilman Compton agreed, saying he has as much confidence in the other Mishawaka businesses that house and handle hazardous materials as he does the city's emergency responders.