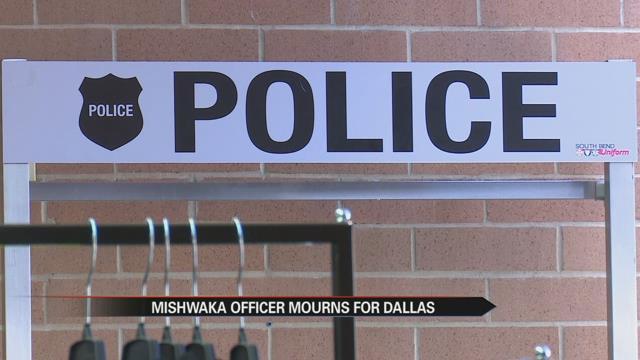 A Mishawaka officer is joining many today expressing his heartbreak for officers shot in Dallas.

He also says he strives not to think about race, and tries to see everyone equally when in the field.

“It’s just terrible what this country’s come to, and just the overall resentment people are feeling toward the police department and just letting people know we are here to help,” Barthel said.

He says majority of police officers are good people.

“We are here to support the public, to do the right thing, and i just ask that people understand that is 99.9% of police officers,” Barthel said.

The shop faced controversy in 2014, entering the national discussion on race and policing, after they released this shirt that says, ‘breathe easy, don’t break the law,’ an obvious play on 'I can't breathe' controversy that unfolded after Eric Garner died from a police choke hold.

The merchandise is on sale in the shop today.

“Basically ‘breathe easy, don’t break the law,’ was a statement that says that we’re here for you,” Barthel said.

His input on how to ease any tension between officers and civilians is take color out of how we perceive each other, whether black or blue.

“We as a society need to be equal. Nobody needs to be above everybody else. There’s no such thing as one race or one person being above anybody else.  So remove color out of the equation and I think that would go a long way,” Barthel said.