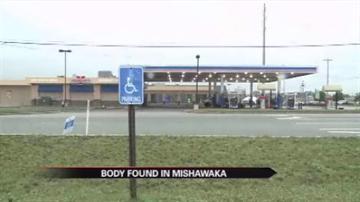 MISHAWAKA, Ind. – Mishawaka Police conducted a death investigation Tuesday morning at a gas after a man was found dead in a van in the parking lot of a gas station at Edison and Grape roads.

"This is really for employee parking for the gas station next door. That's really the only people that park over here,” said Clinton Cutler, employee of City Wide Liquor.

Cutler says he usually parks in the lot as well, but he couldn’t Tuesday morning.

"There was yellow tape surrounding this whole back entrance to this parking lot over here,” said Cutler.

The yellow crime tape is in the dumpster, but the image is still fresh in Cutler's mind.

"The cops were all lined up right over here in this parking lot and I thought they got robbed or something,” said Cutler.

Police weren’t brought to the scene for a robbery. There was a deceased adult male in an older model green van.

When the first employee arrived to the marathon gas station before 5 a.m., she told police the green van was not there.

When the next employee showed up for work, she said the van was parked in the lot and the hood was open.

Mishawaka investigators say the death looked suspicious so they called in the Metro Homicide Unit.

We spoke to someone from the coroner’s office who said the man has been identified as a 45-year-old man from South Bend.

It is believed he died of natural causes, but they are waiting on toxicology results.