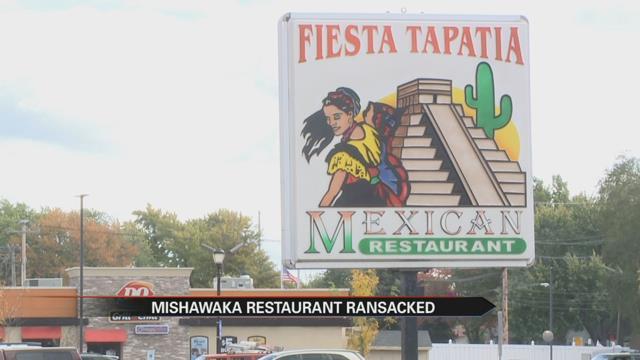 A Mishawaka restaurant that was broken into and burglarized this week is open and back to normal.

Tuesday, when the owner of Fiesta Tapatia came to work, he found the front door of his restaurant shattered.

“The whole thing was shattered. All the glass inside and outside,” said the owner’s son, manager Rodolfo Quiroz.

The door has since been fixed, but the Quiroz family says the burglar took money from an office inside.

“They broke the glass, the front door and went inside and took some money,” Quiroz said.

That’s about all he knows.

According to Mishawaka Police reports, there was hardly any evidence at the scene because employees handled it before law enforcement arrived.

There is also no suspect description.

“There’s nothing we can go by,” Quiroz said.

Quiroz says he even called around to surrounding businesses for camera footage but had no luck.

“Nobody had cameras facing either direction of this side,” Quiroz said.

Now, he’s asking anyone who saw anything unusual to report it.

“Maybe they were passing by or saw something like a vehicle. I mean, if they know something call the cops,” Quiroz said.

After being burglarized twice in a few years, the Quiroz family says they’re getting a security system put in.