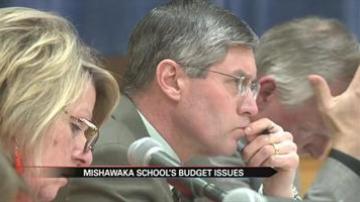 MISHAWAKA, Ind. -- In a special meeting Tuesday night, the Mishawaka School Board announced several major cuts to its budget, some starting immediately.

Worried employees and parents of Mishawaka students voiced their concerns about everything from staff reductions to school closings, but in the end, it was up to the board to decide how the school system will move forward.

She pleaded for the Mishawaka school board to keep school counselors- noting the stresses of elementary and school students and offering statistics to back it up.

Next the board heard from loyal Mishawaka school employees, fearing they will soon be out of a job if the board decides to outsource.

“Please we need our jobs as cafeterians[sic]. Don’t contract it out please.”

And finally, parents took to the stand. One father was concerned about the possibility of Hums elementary getting closed down.

“In the event that a school is closed in a community, where will those children go? It’s a growing concern of mine that sadly on many times has not been answer,” he said.

But in the end the board decided for now, to keep Hums open.

A few cuts that will go into effect immediately are the suspension of freshman athletic teams, with a hope to save $18,000, implementation of a computer based foreign language course, which is expected to save $40,000 and suspension of the elementary orchestra program.

Cuts that are still under consideration include eliminating low participation sports, outsourcing food, custodial, maintenance, and transportation as well as implementing mandatory furlough days for teachers.

The next meeting will be February 19th at 6 p.m. At that time the board plans to continue discussing several money saving ideas.