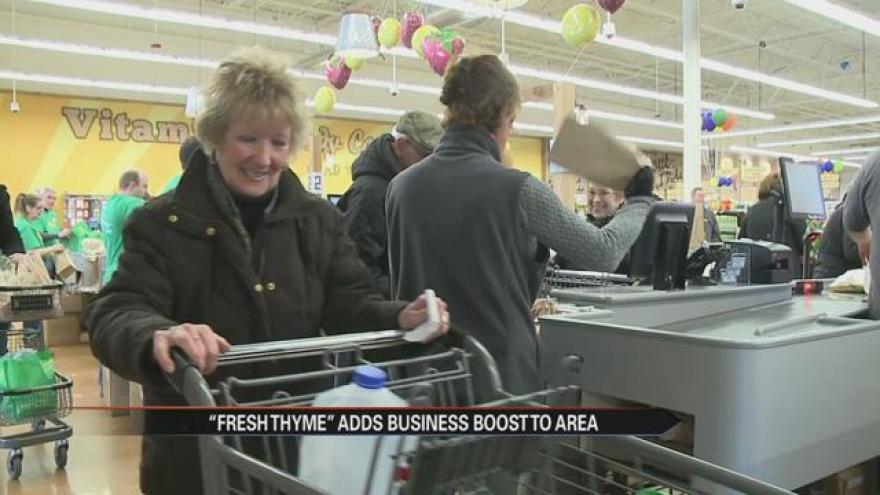 The city of Mishawaka has just added yet another business to its booming economy.

Crowds of eager customers made their way into Fresh Thyme Farmers Market Thursday.

“Everything looks fantastic,” said one shopper just making her way into the store.

Thursday is the grand opening, as another business sets up shop in Mishawaka.

“They’ve looked I think down the road and seen the success of a Whole Foods, the success of a Martin’s locally, or even a Meijer and so that success the others have had has made them want to be there,” said St. Joseph County Chamber of Commerce President Jeff Rea.

A mile or two down the road ABC57 met with the man who helped bring the grocery chain to town-- Tim Mehall, Vice President of Retail with Newark Grubb Cressy & Everett.

He said he used Notre Dame, the University Park Mall and the city’s unique positioning between a number of big cities as selling points.

“The big key is getting out in front of them while they’re making decisions. And letting them know what’s available in the market,” Mehall explained.

According to the St. Joseph County Chamber of Commerce, the county is seeing a population growth for the first time in five decades, income growth and more jobs in the county than ever before.

Empty store fronts within the strip mall are not shaking the confidence in Fresh Thyme’s ability to thrive.

“As businesses move out others have lined up to come right in. So it’s evident today there’s a lot of people interested in this and we’re excited to see our economy growing,” Rea said.

The goal, he said, is to keep business coming and hopefully spreading to other parts of the county, such as the south side of south bend and downtown.

“Here that risk is pretty easy because of the traffic count and concentration. Downtown it’s a little bit harder sometimes. But I think as that population is growing it will become much easier,” Rea explained.