Mishawaka teen attacked and sodomized by five other teenagers 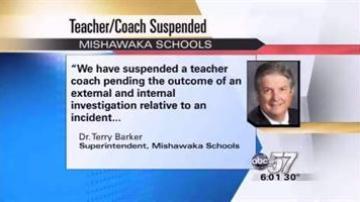 MISHAWAKA, Ind. -- The Special Victims Unit of the Mishawaka Police Department is investigating a sexual battery case that happened at Mishawaka High School.

A 15-year-old boy was assaulted by five other teenage boys who forcibly sodomized him, according to the police report.

Police described the sexual battery as "a strong-arm sodomy using a blunt object such as a hammer or club."

Law enforcement authorities report that this allegedly happened in January of 2010.

All parties involved are minors, so identities have not been released.

ABC 57 News has spoken to several Mishawaka High School parents who said they believe that the sexual battery happened at a wrestling camp.

One parent said the victim may have been assaulted by others at the camp because they believed that he had stolen some money.

The Superintendent of Mishawaka Schools, Dr. Terry Barker, told ABC57 News, "We have suspended a teacher / coach pending the outcome of external and internal investigations relative to an incident that was alleged to have happened in January 2010.”

Dr. Barker also said that the teacher / coach was suspended with pay pending the outcome of the investigations.

Friday night's wrestling match against Lowell, Mich., has been canceled.

Stay with ABC 57 News as we continue to update this developing story.