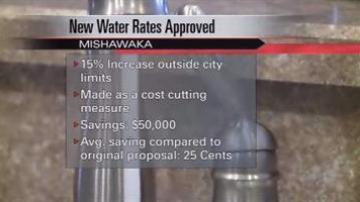 MISHAWAKA, Ind.  — About 17,000 homes and businesses in Mishawaka will see their water rates change. It is the first change to the city's rates in a decade.

The people who live outside the city limits will be the ones most affected by the increase. Those people will see a 15 percent increase in their water bill.

The new rates also means no more discounts for people who use more water.

The city says the changes come from increased costs across the board. And is expected to save the city around $50,000 a year.

It all comes after the city withdrew from state regulation rates.

All members of the Common Council approved the new water rates.

The average customer can expect to actually save 25 cents a month from the Council's original proposal.

The new rates are expected to go into effect in March.