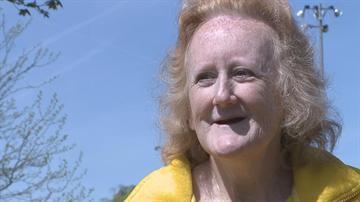 MISHAWAKA, Ind. - A woman who looks as if she has aged decades in a just a few months is still battling a brain tumor but now she has government insurance to help.

We first introduced you to Tina Baugher back in February, a 48-year-old Mishawaka woman, that came to ABC 57 when she had no one else to turn to.

Baugher was diagnosed with a brain tumor in March of 2011 and days after her surgery was cut off from Medicaid insurance.

Baugher was denied for Medicaid six times by Social Services in Mishawaka, so ABC 57 went accompanied her a seventh time. While cameras were outside, staff helped fill out an appeal and within weeks her life changed.

“I got a letter saying I was approved for Medicaid,” said Baugher Wednesday. “You came in there and I think that really scared them.”

Finally, for the first time since her surgery, Baugher can afford to go to doctor and get the medication she was supposed to be taking all year long. “I started scheduling appointments,” she said.

The tumor Baugher had is called Meningioma Tumor. According to the University of California Los Angeles Heath System, the surgery is 85% successful. Baugher was supposed to be having radiation therapy to lessen the chances the tumor returns.

But with no insurance, there was no treatment.

“There’s a very good chance I may have another tumor,” she said.

Almost a year without treatment, her health has deteriorated. If she is diagnosed again, the next battle will be much more difficult. “Having that first one really took a lot out of me.”

Baugher recently had an MRI, she will know the results in about two weeks.