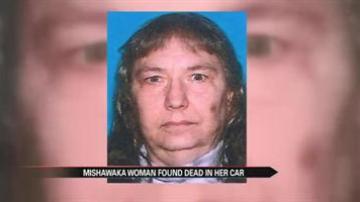 VALPARAISO, Ind -- A woman who disappeared from Mishawaka was found dead Monday in Valparaiso.

56-year-old Renee Koontz who disappeared January 28th was found dead in the back seat of her car.

Her car was discovered covered in snow at a Target parking lot.

There was concern over her safety after her family told police she was suicidal.

Police said there was no sign of foul play and drugs were found inside her vehicle.