Misleading flier tells homeowners their home will be demolished 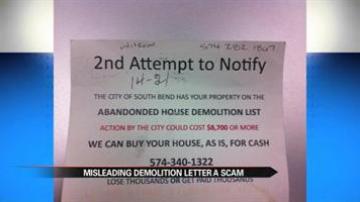 The scammer is distributing a flier that is a warning to homeowners that their house is going to be demolished and it will cost them $8,700.

They say only 200 of the 1177 homes listed as vacant or abandoned are slated for demolition.

The cost of demolition varies on a case by case basis.

Those homeowners whose homes are on the list to be demolished will be notified with more than just a flier.

"Homeowners would know well in advance of any demolition activity on their property. We reach out to owners via certified mail as well as via publication," said Shubhada Kambli of South Bend Code Enforcement.