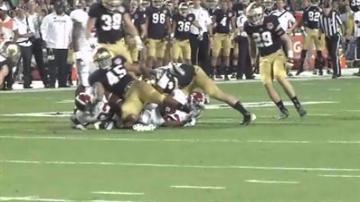 MIAMI GARDENS, Fla. — It was supposed to be a defensive battle. A tug of war at the line of scrimmage. Instead it was a lopsided fight.

The Irish made it through the entire season without a allowing a touchdown drive longer than 75 yards. Alabama had six scoring drives that exceeded 70 yards.

Offensively, the Irish were in a hole early. The Tide shut down the run game and only allowed Notre Dame 32 yards on 17 carries.

"They showed us a couple blitzes we didn't pick up, and obviously if we can't pick 'em up then it pressures the quarterback and you know puts pressure on him," said Irish offensive tackle Zack Martin. "So, you know we could've done that a bit better. We saw a lot of what we saw tonight on tape."

For 40 days the Irish prepared for Alabama. But for the seniors it has been four or five years of dedication leading into Monday's game.

"Couldn't have asked for a better group of guys to spend my last year with," said offensive guard Mike Golic, Jr. "You know, seniors all the way down. It's good to know this team is in good hands. There's a lot of great guys that are gonna lead these guys and I know that."

The players said it is hard to look back on this 12 - 1 season as a success. But it is the foundation of a new era of Notre Dame football.