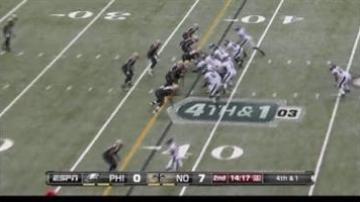 NEW ORLEANS -- The New Orleans Saints took on the Philadelphia Eagles at the Superdome Monday night.

It was a rough night for Eagles QB Micheal Vick.

Vick was licking his wounds after he was sacked seven times. Eagles' Brandon Boykin took the kick in his own end zone, but Eagles' Riley Cooper played possum. That's when Boykin threw across to Cooper on the trick play.

He ran it in for the touchdown, but Cooper went forward illegally and the Eagles were penalized. The touchdown was taken away. The Saints came out on top with a final score 28-13.

The end of the game got a dose of politics. Both President Obama and Republican challenger Mitt Romney were featured in interviews that aired during halftime.